The Town of Mammoth and the Department of Fish and Game, at major odds over bear management for many years, still have their differences.USDA trapped and killed a bear and her two cubs this week. According to one Mammoth official, Town Council members found out Friday. They were not happy. 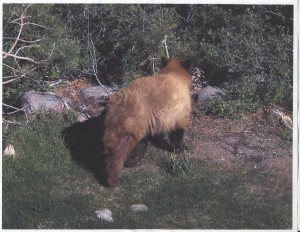 They later learned that the Forest Service and Fish and Game apparently arranged to destroy the bears without bothering to communicate with the Town.

Then, out of the blue, council members said the Town Manager informed them that Fish and Game had come to Mammoth to shoot three bears. Councilman Skip Harvey wanted the public to know that neither the Town Council, the Wildlife Sub-Committee, Steve Searles nor the Police Chief knew about Fish and Games plans or about the destruction of the bears. Assistant Town Manager Karen Johnston said her understanding of the incident was that the Forest Service had received a complaint about the three bears from a Lakes Basin property owner. Johnston said the Forest Service worked with the USDA and Fish and Game to kill the bears.

Harvey was disturbed that Fish and Game had consistently refused to help with Blondie the Bear and for whatever reason killed three other bears with no explanation. Of the Forest Service and Fish and Game, Harvey said both agencies “know we’re supposed to work together on this kind of thing.”

Harvey and others were mystified that Fish and Game representatives, present at the Wednesday Wildlife Sub-Committee meeting, said nothing about killing the three bears, particularly considering the current climate over handling of bear issues in Mammoth. Harvey said, It appears Fish and Game doesnt want to work with the Town. I want it to be really clear, said Councilman Harvey, None of us knew about this.

No one answered any Fish and Game phone we tried today for their response. We have called the Forest Service and await further information.

Deputy District Forest Service Ranger for the Mammoth District, Mike Schlaffman, explained that a private property owner in the Lakes Basin, who had suffered “thousands of dollars” in property damage after bear break-ins, asked for a depradation permit.Fish and Game issues the permit, Schlaffman explained, but the Forest Service does advise homeowners of their ability to obtain a depradation permit. In many cases the homeowner would carry out the deed, and shoot the bear, but in the interest of safety, Schlaffman reports that Fish and Game covered the cost of hiring the USDA trappers.

Schlaffman didn’t know precisly when the bears were trapped and killed, but did saythat the permit was issued starting August 24.

On the issue of the communication breakdown between the Town and the State and Federal Agencies, Schlaffman says that the issue, “slipped through the cracks,” but adds that there was “no effort to keep quiet,” on this issue. Schlaffman says that he was not present at the Town’s Wildlife Subcomittee meeting on Wednesday. He says that he told Townstaff at a meeting onThursday. He says he was suprised that Townstaff didn’t know about the effort at that time.

We work to provide daily news to all of the Eastern Sierra, in the tradition of Eastern Sierra News Service and the Sierra Wave. We bring you daily happenings, local politics, crime, government dealings and fun stuff. Please contact us.
View all posts by News Staff →
Mammoth Crossing Project Demonstrates Height
Small Fire in Bishop Area