The Owens Lake with water in it, news flashes on our water headed to Los Angeles. A new 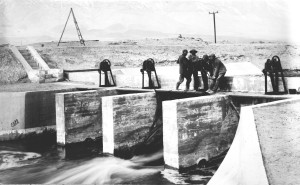 photo exhibit at the Eastern California Museum reveals the way it was from 1908 on.

That was the era of the construction of the Los Angeles aqueduct from the Owens Valley and plans for water export from the Mono Basin. Museum Administrator Jon Klusmire said that 2008 is the 100th anniversary of the start of aqueduct construction. “The museum will mark that occasion with several exhibits and events in the coming year.”

You can also check out local news reports of the time. W.A. Chalfant and Harry Glasscock, Owens Valley reporters, told the sad truth about a dried up valley following the aqueduct and water export.

We work to provide daily news to all of the Eastern Sierra, in the tradition of Eastern Sierra News Service and the Sierra Wave. We bring you daily happenings, local politics, crime, government dealings and fun stuff. Please contact us.
View all posts by News Staff →
Mammoth Hospital Workers Rally for Interim CEO
Gasoline Theory of Relativity