After four days of community outreach, Mammoth Lakes has a pretty good idea what locals think the affordable housing project. The Parcel, needs to be. 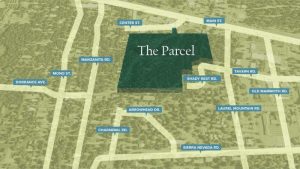 The result: a range of attractive townhouses, apartment buildings, open space, day care, plenty of room for snow storage, a tidy, walkable community with 350 to 500 units, depending on which of the three possible configurations presented by Lisa Wise Consulting.

Last week’s workshops puts the town half-way through the process of defining the future of the 25-acre parcel, formerly known as Shady Rest. Two more workshops are planned, in early October and December. These will be more formal sessions with Town Council and Planning and Economic Development Commission.

The task is daunting. At the end of Friday’s finale, John Armstrong suggested the solution is to make Mammoth bigger. That’s probably not do-able.

Jen Daugherty, a senior associate with LWC, ran through the objectives of the development: affordable housing, mobility, amenities, open space, environmentally sustainable and livable. “We may not get all we want,” she said.

According to Daugherty, the workshops were attended by approximately 90 people—that pencils out to a little more than 1-percent of Mammoth’s total population.

Drew Finke took over the dialogue with more of the specifics. The lowest density configuration, with 350-400 units, allowed for one parking spot per unit, two-story structures with lots of town houses. Medium density, 400-450 units, included structured parking and denser building types with 1.5 parking spots per unit. The highest density layout for 450-550 units would pipe Mill Ditch to allow for more developable land.

The initial phase penciled out at $50.3 million for 106 units, a mix of one to three bedrooms and studios, in five buildings on 1.1 acres.

Finke indicated there were 11 sources of funding to make the project feasible.

Tom Hodges, Mammoth Mountain’s vice president of development, spoke up during the comment period. Citing the prevailing wage and total cost of the units, he suggested the town would have to pony up $20-30 million to make The Parcel happen. He didn’t indicate how much Mammoth Mountain was willing to throw in the pot.

The Parcel, Town of Mammoth Lakes