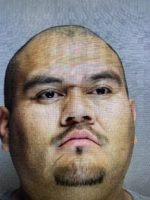 Steven Ariaz, a 37-year-old Bishop man, is being sought by the Sheriff’s Office

The Inyo County Sheriff’s Office reported that on June 10 at approximately 7:50pm Sheriff’s Deputies attempted to conduct a traffic stop in the Bishop area on Steven Ariaz, a 37-year-old Bishop man who has an active and confirmed no bail felony arrest warrant.

According to deputies, Ariaz pulled over and as the Deputy exited the patrol vehicle to approach the car, Ariaz took off and the high-speed chase was on. The vehicle traveled at speeds more than 130 mph throughout the Bishop area and U.S. Hwy 395 north of Bishop.

The report says that during the pursuit, Ariaz collided into one of the Sheriff’s patrol vehicles which disabled it. He continued to flee until he crashed. Then he fled on foot and is still on the loose.

Later, it was found that Ariaz’s vehicle had four occupants, one of which was an unsecured infant on the lap of a passenger.

Steven Ariaz is still outstanding for the active and confirmed felony arrest warrant, He is being described as armed and dangerous.

The authorities are advising that, if anyone in the public sees him, to please call 911. They also warn that you should not attempt to contact him.

If you or anyone you know has any information about this incident or the whereabouts of Steven Ariaz, please call the Sheriff’s Office at 760-878-0383 option 4.

First of all, how was it “later determined” that there were four occupants in the vehicle? Has this been verified or is it hear say? I assume it is an ongoing investigation since they are requesting information from the public. Secondly, I watched a video clip of part of the… Read more »

He could have walked back to Bishop unseen. Please some updates. It’s hard to sleep with a .38 under my pillow.

It’s slowly getting to the point where you need that .38 under your pillow every night (and day) ..

It would be helpful if they would release the location where THE SUSPECT took off on foot so local residents can be on high alert.

Was the CHP helicopter avaliable? They have FLIR

It would have been good to advise the public in which area he escaped on foot , don’t you think ?North of Bishop could be anywhere from Laws , all the way to Monty Pass.