By News Staff on April 10, 2014 in Entertainment/Local Events/Activities, Public Event 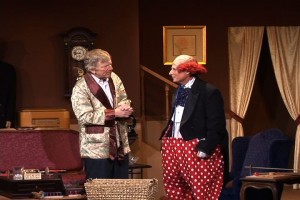 “Sleuth,” which premiered at the Edison Theatre last Thursday is a Tony award winning play written by Anthony Shaffer in 1970 that takes place in the English manor of an eccentric mystery writer named Andrew Wyke. Wyke, who has a morbid obsession with both murder and games, invites his wife’s lover, Milo Tindle, over to the house and sets about convincing the younger man to stage a robbery of some well insured jewelry.  Driven by his own greed and the fear that he will not be able to support Wyke’s wife in the way in which she is accustomed, Milo reluctantly agrees.  Claiming that he will commit the robbery out of love, Milo states, “You’ve got to be serious about love.” The cynical Wyke retorts by saying, “You’ve got to be serious about crime if you want to be in love.”

This proposal sets off a wild game of cat and mouse.  The only question is, “who is the cat, and who is the mouse?”  In this instance, the play’s title, “Sleuth,” actually refers to the audience itself.  It is up to the audience to put the pieces together and figure out who is playing whom. “The audience is a character in the play,” says play director Allison McDonell Page.

Page, a former actress in New York City and Los Angeles, is a Sierra Classic Theatre board member who has directed, “August: Osage County,” and “Proof,” for SCT, amongst others. However this is her first time directing a play for the Mammoth Lakes Repertory Theatre.  In “Sleuth” she does a tremendous job working with such a small cast. Rick Phelps, who plays Andrew Wyke, and Kevin Green, who plays Milo Tindle, had nothing but praise for Allison and spoke about what a thrill working with Page was.  Phelps himself is no stranger to the stage, he earned rave reviews for his performance as Big Daddy in “Cat on a Hot Tin Roof, “ and this marks his third time working with Page, who directed him in a supporting role in “August: Osage County” and the lead role in “Proof.” Phelps does a spectacular job in bringing out all of Wyke’s quirkiness and ruthlessness. Kevin Green made his theatrical debut in last summer’s SCT production of, “The Complete Works of William Shakespeare.” Here he returns to the stage to play Milo Tindle, the young lover of Wyke’s wife. Green brings great energy to the stage and a multidimensional performance that was quite impressive.

I would love to say more about this great play at the Edison Theatre, but I feel like I would give too much away. There are some big reveals that happen in the play and it is up to you, the audience, to figure it out. The director, Allison McDonnel Page, asks that you,” don’t watch the movie before you see it (“Sleuth”).  It is more fun if you don’t know anything about it.” So come and figure out the mystery at the Edison Theatre. “Sleuth” is running until April 13th  with showtime Thursday through Saturday at 7 PM and a Sunday Show at 4 PM. For more information or to purchase your tickets go to www.EdisonTheatre.org.

We work to provide daily news to all of the Eastern Sierra, in the tradition of Eastern Sierra News Service and the Sierra Wave. We bring you daily happenings, local politics, crime, government dealings and fun stuff. Please contact us.
View all posts by News Staff →
Chamber, Rotary host candidates forums
Bentley – found! (see video in story)