Police controversies in Mammoth, land and water squabbles in Inyo. These gnarly deals lead right back to the top, we hear people say. We’ve fielded lots of website and telephone comments on the police thing. 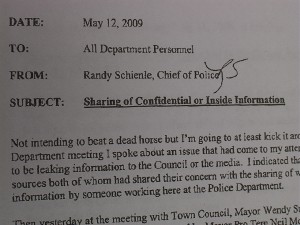 This week’s controversy stemmed from a reported memo issued by the police chief. He’s on vacation. The memo’s message to police officers – don’t talk to anyone about police matters. We hear the Grand Jury took that to mean, don’t talk to them. Others felt it was designed to keep the public and the Town Council in the dark. The dark is not a good place to be.

Anyway, the town manager said he knew nothing about a memo. So did the police lieutenant. We have obtained a copy of the memo which does, in fact, exist. We will read it in its entirety.

The memo is dated May 12th to all police department personnel from Randy Schienle, Chief of Police. The subject – Sharing of confidential or inside information.

“Not intending to beat a dead horse but I’m going to at least kick it around a bit. At last week’s Department meeting I spoke about an issue that had come to my attention surrounding someone thought to be leaking information to the Council or the media. I indicated that I had spoken with two very reliable sources both of whom had shared their concern with the sharing of what should be internal departmental information by someone working here at the Police Department.

“Then yesterday at the meeting with Town Council, Mayor Wendy Sugimura, unprovoked, reiterated the exact same thing and this was supported by Mayor Pro Tem Neil McCarroll. Wendy spoke to everyone that was present about the negative affect this inappropriate, and I believe inexcusable information sharing was having on the organization as a whole; but more importantly how she believes this is leading to the Department being under constant scrutiny from the public and the Council. Once again Neil echoed her sentiment. This should have been a wake-up call to everyone present. We’re shooting ourselves not in the foot, but in the head!

“Earlier today, I spoke with Former chief Mike Donnelly who told me his son Brian had called him about the problems at the PD – discussing the fight in Vegas; the Grand Jury investigation; internal problems at the PD, and, the possible take-over by the Sheriff’s Office. I know Brian works for the CHP, but from 300 miles away how in the world is he privy to this information? Mike asked the same of me. Mike and Brian are supporters, but how do they have the information?

“First and foremost, I want to reiterate what I have already told others. I refuse to believe there is anyone working here at the PD that is so malicious that they would compromise the careers of their coo-workers for potential personal gain, or to ruin another’s career. I do not believe anyone here would be that cowardly and lack such integrity.

“However, there is apparently someone in this organization that lacks judgment or common sense. Five persons, all with credibility have stated there’s a snitch amongst us. This has to get one’s attention. I ask everyone to exercise common sense in what they share and whom they share information with. Should this internal strife continue, the Council and the media will continue to target this organization and its personnel. The nonsense must stop, immediately!

“Use your head, be careful who you speak with and what you share. The entire department is suffering from one or two persons that are maliciously or carelessly sharing information and it simply serves no purpose.

“If you have a concern, bring it up in briefing, talk in private, swing by my house or office, but STOP THE DESTRUCTIVE BEHAVIOR. YOU ARE COMPROMISING THE CAREERS OF EVERY MEMBER OF THE ORGANIZATION.”

We in the Bureaucrat Beat newsroom will only say that the public and the Town Council have a right and even a duty to know what officers are up to and how the police department functions. It’s not about targeting anyone. It’s about revealing the truth.

If there is a whistle-blower, he or she is protected by law. End of story.

Ethics Missing In Action? Even Harvard has admitted that. Seems a crop of graduates from the Harvard Business School will take a new oath that the goal of a business manager is to “serve the greater good.” Wow. Not to make obscene amounts of money!?! What a relief.

Harvard and other business schools have figured out the obvious – our economic calamity comes from greed. The schools have added ethics courses and the philosophy that business is more than a money-making enterprise, and part of a large social community.

The wider community of the Owens Valley suffers from territorial angst over LADWP’s domination of land and water ownership. Citizens, featured in the Los Angeles Times last month, have re-issued a petition. They point to a goal in the Inyo General Plan of no net loss of privately-owned land. Then they point to DWP’s plans to buy 100 more acres north of Independence.

Scott Palamar and Jennifer Castaneda say that with so little privately owned land for modest growth Inyo needs to come up with a plan to stop the decay in the south county. Check out www.petitiononline.com.

Talk about greed to the core. Because of medical costs and insurance companies, healthcare costs play a role in 62% of bankruptcy filings. An article in the LA Times also said that health insurance offers no guarantee that illness won’t bankrupt you. Enough evidence for the need to reform health care? We in the Bureaucrat Beat Newsroom think so.

A Bishop woman brought in a letter she received. Local law enforcement figured out it’s a scam of some sort. At the top of the letter sit a Reader’s Digest and Pepsi logo. The letter says the woman won $1,000,000 and has to deposit a small check to cover fees. Bet they’ll find out her bank account and scam her that way. This lady was too smart for the clumsy crooks.

We work to provide daily news to all of the Eastern Sierra, in the tradition of Eastern Sierra News Service and the Sierra Wave. We bring you daily happenings, local politics, crime, government dealings and fun stuff. Please contact us.
View all posts by News Staff →
Open House for CARMA “Big Ears” Telescopes
Well Test Drains Tecopa Community Center