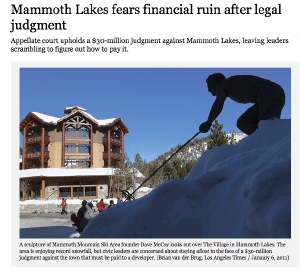 Reporter Louis Sahagun traveled to Mammoth Lakes for the story.

the specter of potential municipal bankruptcy. Now, everyone else knows too with a Los Angeles Times story out Monday.

The Times points to the snowiest winter in memory overshadowed by this legal doom. The Times quotes real estate broker Steve Schwind as saying that the people have lost confidence in the Town Council’s ability to serve. John Walters of Mammoth Lakes said he’s scared the situation is worse than officials are admitting.

The reporter also quoted Councilman Rick Wood who said it would be terrible “if the town splinters into angry factions.” Mayor Skip Harvey said, “The time for finger-pointing is over. We must work together on the best possible solutions.”

The Times article asks the question, can the plaintiff raid special emergency reserves? How would drastic cuts in basic services or filing for municipal bankruptcy affect investment, tourism and property values….” Rick Wood is quoted as saying that he suspects the plaintiff “may want to attach the town’s revenue stream, in which case,” he said, “we will file for bankruptcy and argue with them over that for years and years.” This, Wood said, if Mammoth is even eligible for municipal bankruptcy.

We work to provide daily news to all of the Eastern Sierra, in the tradition of Eastern Sierra News Service and the Sierra Wave. We bring you daily happenings, local politics, crime, government dealings and fun stuff. Please contact us.
View all posts by News Staff →
Attention, dog walkers
Officials to meet this week over Alpers Trout loss