By News Staff on April 5, 2021 in LADWP, Nature, Press Release, US Fish and Wildlife

LADWP Watershed Resource Specialist, Bill Deane looks into a spotting scope during an early morning sage grouse count. Every spring Sage-Grouse congregate in leks, an area where the males’ courtship display can easily be seen by females.

Portions of LADWP-owned lands in Mono County (Long Valley) have provided historic and important habitat for this species and this encouraged LADWP and USFWS to develop conservation strategies that can be implemented on LADWP property. The Plan was collaboratively developed with input from other regulatory agencies and sage-grouse experts and is intended to be a living document to guide land management decisions that will ultimately preserve and enhance the Bi-state sage-grouse population. In addition, the Plan follows the collaborative 2014 Conservation Strategy that includes commitments to maintain sage-grouse breeding grounds (leks) and nesting and brood rearing habitat across 38,389 acres of LADWP-owned property within the Bodie Hills and South Mono population management areas.

“The key to successful projects is working together with like-minded partners like the U.S. Fish and Wildlife,” said LADWP General Manager and Chief Engineer Martin L. Adams.  “LADWP has a long history of development and implementation of projects to sustain and enhance biodiversity on the lands it manages in the Owens Valley and Eastern Sierra and remains steadfast in its continued commitment to environmental stewardship.” 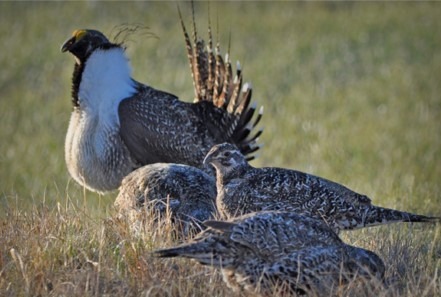 The Greater Sage-Grouse that occur on L.A. City lands are part of the Bi-State population of Greater Sage- Grouse.

The overall goal of the Plan is to achieve the highest quality habitat conditions for the sage-grouse within LADWP’s operational capacity and with the most efficient allocation of water. Specifically, the Plan provides an approach to better identify objectives for managing mesic (wet, green), brood-rearing habitat in pastures that have historically been altered by supplemental irrigation. LADWP biological resource staff will help determine conservation activities by preparing an annual monitoring report about water availability and distribution for the year, as well as the habitat quality results.

“Employing this Adaptive Management Plan for the sage-grouse allows us, as regional partners, to be nimble and continually update management practices to meet new challenges,” Said Richard Harasick, LADWP Senior Assistant General Manager of Water System. “We are encouraged by this collaborative effort and are confident that we are taking steps in the right direction to help protect existing resources and enhance the region’s unique ecology.”

LADWP is proud to work with other interested groups to ensure the best outcome for the sage-grouse. To help develop the Plan, LADWP and the USFWS established a technical working group and invited the following stakeholders to participate: Audubon Society, local ranchers, Bureau of Land Management – Bishop Office, Inyo National Forest, U.S. Geological Survey, California Department of Fish and Wildlife, and Mono County.

LADWP also continues to focus efforts on ongoing monitoring and maintenance such as adopting specialized grazing plans to reduce interference with sage-grouse and minimizing recreational impacts through public education signage, barriers, and dedicated walkways. It continues the enforcement of a Sage-Grouse Viewing and Access policy on its lands, which includes seasonal closures during peak breeding periods.

Since the early 1990s, LADWP has focused on natural resource projects that restore riparian vegetation along the Owens River, Mono Basin and tributaries. In addition to water quality and water quantity benefits from these projects, plant and animal biodiversity has increased, fish and wildlife populations have increased, and there are more acres of wetlands in the watershed than in decades past.

They’ve always allowed the public access to recreate; hunt, fish, hike, bird watch, off road play and all sorts of recreation with very few closures. I don’t think anyone had to sue to get those. They’ve given leases to towns, , the county, businesses and all sorts of things that… Read more »

With respect BobK . They do not have the resources to restrict access. They do where they can like closing off access to Crowley. They restrict development in the towns and are in violation of the LTWA which provides for limited development with required releases of DWP property that they… Read more »

Work with the Friends of the Inyo, work with the Tribes, the Sierra Club, the OVC, and work with Inyo County on a Groundwater Sustainability Plan for the Adjudicated portion of the Owens Basin and do it without being required by the Courts. That is stewardship and that is what… Read more »

Nice press release. The only reason DWP has done any of this is because of lawsuits, not out of the goodness of their hearts or to help the valley.

Agreed. Except for exporting water the only reason LADWP does anything in the Eastern Sierra is because of lawsuits.