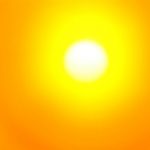 Temperatures are soaring this week. Today it is supposed to be as high as 100 degrees in Bishop, as well as over the next three days for communities along Hwy 395. That’s at least one good reason to stay at home inside with the swamp cooler or air conditioner running. Avoid strenuous activity. Exercise or plan arduous activities in the cool of the mornings before it gets hot. Triple-digit weather is expected over the next three days in the Owens Valley. Temperatures in Mammoth Lakes are expected to be in the low 80’s, which is actually kind of warm for that area.

We can’t seem to win during this coronavirus pandemic lest we catch it and possibly die. So, we’re told to stay at home, away from others; but you’re going stir-crazy and decide to go outside, and then face the possibility that you might die from a heat-related emergency! The elderly and young children are the most likely candidates for heat stroke, also called hyperthermia, but pretty much everyone is susceptible to heat exhaustion. 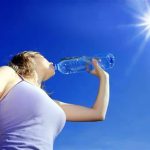 The best defense against heat-related emergencies is to stay inside or at least in a cool space or in the shade whenever possible when outdoors. Wear light, loose clothing, and a hat. Wear sunscreen on parts of your body that might be exposed. And one of the most important things to do: Drink lots of fluids, preferably water.

Avoid alcohol, which while a liquid, can cause dehydration. Not only does it get very hot here in the Owens Valley, but the air gets really dry, with extremely low humidity, which adds to the danger of dehydration.

Swim only where lifeguards.

It appears unlikely that our local swimming pools will be opening this summer, although no “announced decisions” that we are aware of have been made to that effect. Unfortunately, that means that most likely locals will go to the local river and lakes to stay cool. Problem there is, no lifeguards.

Look out for your pets, the elderly, and young children. Never leave a young child or a pet unattended in a car or any vehicle as temperatures rise quickly inside cars.

Every year we hear the tragic stories of young children and pets left unattended inside of cars, often for what the driver thought was only going to be a few minutes, and the worst kind of tragedy follows: the death of a child or beloved pet. Never, ever leave a child or pet unattended in hot cars or for that matter, even outdoors.

JUST DON’T DO IT!