By News Staff on February 9, 2014 in Government Agencies/Utilities 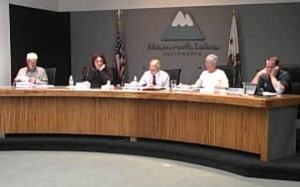 Apparently the Mammoth Town Council has kind of decided they like the guy they already have to stay on as permanent Town Manager. They will put together a contract for now Interim Town Manager Dan Holler and discuss it publicly February 19th.

The Council had debated, delayed and disagreed over hiring a consultant to recruit a permanent manager. So, finally Mayor Rick Wood said, “We heard the message that the selection process for permanent Town Manager should be transparent.” He went on to say one way to do that would be to hire a consultant, but, he said, a majority of the Council are not supportive of that. Wood then switched to a different conversation. He advised consideration of hiring Interim Manager Holler as the permanent guy.

Wood then said he had gone so far as to have discussions with the Town Attorney and Holler about terms of a contract. Wood asked his colleagues to authorize crafting an agreement for “the Town Council and the public to discuss on February 19th.”

Council woman Jo Bacon said she would like to see a contract with a “reasonable length of time and not a huge severance pay out clause and something that reflects a salary commensurate with the size of the town.”

Mayor Wood saw the same opportunity to, as he said, revamp the compensation structure for “non-union personnel.” Councilman Matthew Lehman said he agreed 100% on the severance pay which he said had been the “downfall for us over the decades.”

All of the Council agreed to direct Mayor Wood and others to come up with a deal for Holler that would be open to public discussion.

“I guess in a town where apathy is the political norm the Town of Mammoth Lakes gets what it deserves.”

Not to worry, nobody will notice…

Why not wait until the new Council members are elected this coming June? The community will have the opportunity following the purge of Wood and Eastman to have their newly elected officials have input on this very important decision. Why should Wood and Eastman have the right to determine our… Read more »

Who's Running??
Reply to  h

There won’t be new council members because no one is running except Deb P. So, if Lehman doesn’t run again like he says he’s not, we’re still stuck with Wood and Eastman. Again.

Benett Kessler
Reply to  Who's Running??

Did you read the story we just posted? Mr. Eastman confirmed he will not seek re-election. Mr. Wood is still considering it.
Benett Kessler

Who's Running??
Reply to  Benett Kessler

I must have missed it, Benett. Thanks for mentioning it. I guess we’ll see, won’t we? It’s a shame the job doesn’t pay more. Better people would run if they were being paid for their time.

Reality Check
Reply to  Who's Running??

Remember that each elected Council Member gets full taxpayer paid health, vision, and dental benefits for themselves and any dependents. If you add that up on an annual basis, its significant compensation not withstanding the $300 per month.

The council can never keep any commitment. How about sticking with the original plan and use the interim manager for the transition while they seek more qualified candidates. This guy was selected from a pool of qualified applicants of one and now he is good enough. What a joke. These… Read more »

Meet the new boss, same as the old boss…

Surprise! TC wouldn’t know transparency if they tripped over it.