There he was, in the middle of the opening of fishing season, Governor Schwarzenegger and actor extraordinaire, skiing Mammoth Mountain and charming kids from inner cities who got to ski Mammoth through the California After School All Stars program. 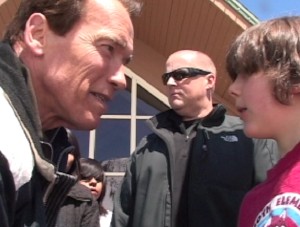 Arnold enchanted the crowd on the sundeck at Mammoth Mountain Inn. Rusty Gregory committed $5 from every lift ticket over the week-end with, he said, close to $50,000 going to the Governor’s All Star program. Mammoth Mountain also treated the kids to a career panel. Ski Area employees explained their jobs and career paths.

The Governor revealed that he had help as a kid in Austria, help that guided him to his life successes. He wants to do that for young people in California. He said, “Life is about everyone getting an equal chance.”

Mammoth Mountain CEO Gregory talked to Cleland Hoff about the All Stars program and the more than 60 inner city kids who came to the mountains and met the Governor. “The Governor always creates a big crowd,” said Gregory, 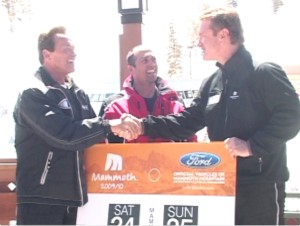 “but today was not about the State of California. It was about disadvantaged kids from inner city Los Angeles, San Diego and Las Vegas who are part of Afternoon All Stars, a charity that the Governor founded some years ago. He’s now honorary chairman. The program takes kids from inner city schools and provides them the opportunity to engage in sports, educational programs and after school activities that without the Governor’s support of the program, they wouldn’t have a chance to do.”

Arnold said he started skiing, not in Austria, but at Mammoth Mountain in the 70s. He said Mammoth is where he likes to ski and likes to bring his family for fun. To prove his fondness for Mammoth, the Governator hit the slopes himself. Nobody talked about the gloom of Sacramento finances on the sunny day. In fact, we may see more of Arnold as he leaves the Governor’s mansion and heads for the next chapter of his life.

We work to provide daily news to all of the Eastern Sierra, in the tradition of Eastern Sierra News Service and the Sierra Wave. We bring you daily happenings, local politics, crime, government dealings and fun stuff. Please contact us.
View all posts by News Staff →
Fire at Mammoth Lakes Condo
More News on Cottonwood Plaza