By News Staff on February 20, 2014 in Entertainment/Local Events/Activities 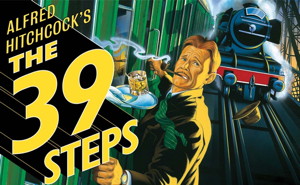 It’s funny and mysterious. Check out Rob Gill’s video below.

During a season of dismal snowfall the town of Mammoth Lakes could use a laugh, and the laughs were non- stop at The Edison Theatre last Thursday during the opening of The Mammoth Lakes Repertory Theatre’s newest production, “The 39 Steps”. Shira Dubrovner directs a cast of four that seems more like a cast of four hundred.Thanks, in part, to the wonderful set design of Karrah Spitznagel and Tim Casey (who also appears as Clown 2). Patrick Barlow’s theatrical adaptation of Alfred Hitchcock’s classic 1935 film is a two time Tony award winning comedy that follows Richard Hannay as he is accidentally and hilariously plunged into a world of espionage and intrigue.

In the lead role is Jesse Steele of Big Pine who plays the mild mannered Richard Hannay with great charm and shows splendid comedic timing. Bishop’s Julie Runcie plays Steele’s romantic foils…all of them. Runcie who appeared most recently as Catherine in Sierra Classic Theatre’s production of “Proof,” shows her range playing German, Scottish, and British characters. Erica Sutch will be stepping in to perform the female roles February 27th- March 2nd. Also playing multiple roles, actually, playing ALL the other roles, are Greg Klino (Clown 1) of Reno and Tim Casey (Clown 2) of Mono City. This is Klino’s first MLRT production but he is certainly no stranger to the stage while Casey has been in a number of performances at The Edison, most notably being the title role of “Dracula.” The comedic duo play more parts than one dares to count, switching characters seamlessly and doing quick changes on stage in this fast paced madcap farce that takes the audience around Western Europe in pursuit of the “39 Steps,”…..whatever that is.

Will Richard Hannay find true love and stop the super top secret air defense military secrets from leaving the country? As the play’s dastardly villain would say, “You vill never know,” unless you take this wild ride at The Edison Theatre. The play runs until March 2nd with showtimes at 7pm Thursdays, Fridays, and Saturdays with a 4pm showing on Sundays. If you want to purchase tickets or get some more information on this fantastic production just go to www.EdisonTheatre.org. In the words of Richard Hannay, “come on, man, find something to do, you bloody fool. Something utterly mindless and pointless, something useless, something… I know… I’ll go to the theatre!”

We work to provide daily news to all of the Eastern Sierra, in the tradition of Eastern Sierra News Service and the Sierra Wave. We bring you daily happenings, local politics, crime, government dealings and fun stuff. Please contact us.
View all posts by News Staff →
Eager new friends
Mono Board rejects civil rights claim
2 Comments
Newest
Oldest Most Voted
Inline Feedbacks
View all comments

Going to this Sunday’s matinee…can’t wait!