Tickets for Playhouse 395’s upcoming fall production of “The Doyle and Debbie Show” are on sale now.

The Doyle and Debbie Show is sublime parody, simultaneously lampooning and idolizing country music’s tradition of iconic duos and their subsequent battle of the sexes. 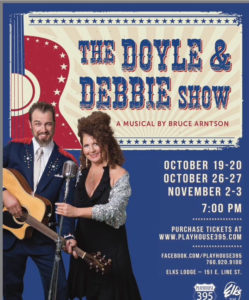 Steven Christie, Patricia Barton and Roger Fearer wield the vocals of vintage country stars and take audiences on a freewheeling joyride through a wickedly funny script and slew of equally outrageous original songs.

Over the past eight years, Doyle and Debbie have developed a rabid cult following in Nashville and Playhouse 395’s performance is one of the few ever done on the west coast.

Doyle Mayfield is an old-guard country star in the Porter Wagoner/George Jones mold, who had a handful of regional hits with his duet partner Debbie, back in the ’70s and ’80s.

Thirty years, four wives, and three Debbie’s later, he finds himself back in Nashville at a Lower Broadway honk-tonk for one final attempt to regain his former “glory.” Doyle has just discovered his new (third) Debbie singing at the VFW Hall in his hometown of Mooney’s Gap in East Tennessee, and immediately saw her as his ticket back to the big-time.

Debbie, a single mother of three, sees Doyle as her last chance to make it to Nashville and make a record, but she is gradually realizing what a terrible mistake she’s made in hitching her star to this loose cannon.

“The Doyle and Debbie Show,” a parody of country music, is hilarious and drop-dead funny. After a long, hard day, this washed-up pair will tickle your funny bone with such original spoofs as the jocular “Stock Car Love” (“I miss the pole position”) or the moralizing power ballad “For the Children” (“They’re gonna grow up thinking Darwin’s cool / While God can’t even show his face in school”) and even, “Just Keep Me Barefoot and Pregnant,” (“I won’t gibber / Like a silly women’s libber / When your ball games’ on TV.”