The Alabama Hills can be viewed from two different perspectives. For indigenous people and other locals, the Hills are a special place of beauty, a piece of art that took the earth eons to craft. For a growing number of visitors, it’s a unique place to come and play. 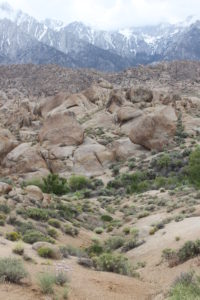 The issue facing the Bureau of Land Management and stakeholders is developing a management plan that, according to BLM Bishop Field Manager Steve Nelson, balances use and conservation.

That will take the wisdom of Solomon.

Owens Valley residents are used to looking at vast open spaces with no people in the picture. With the current dispersed camping in the Hills, local eyes see an RV as a scar on that landscape.

Currently, Nelson and the local BLM office is involved in the transfer of land to the Lone Pine Paiute Shoshone Tribe. That transfer was included in the Natural Resources Management Act that gave the Hills a National Scenic Area designation. 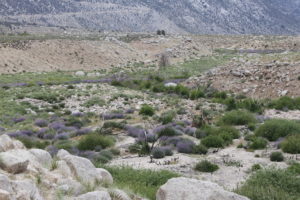 “The overall land use is already done,” Nelson said. “We’ll focus on maintaining and improving the landscape.”

Fifteen years ago, the Stewardship Group’s mission statement emphasized the serenity, fragility and unspoiled nature of the area, said Kathy Bancroft, Tribal historic preservation officer for the Lone Pine Paiute-Shoshone Reservation. Since then, more visitors are flocking to the area. She tells the story of a potential zip line festival whose promotor saw massive crowds attending. Despite efforts to squash the event, the promotor showed up but was escorted out of the area for lack of a permit. 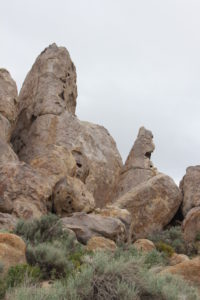 But, maintaining the serenity of the Alabama Hills is doable, she said. Education has to be part of the solution. Stewardship Group members and BLM Ranger Dave Kirk spend time on weekends talking to visitors, discouraging the spread of over-used camp sites. “Dave talks to people,” she said, “and those people talk to others. But, he’s only one guy.”

Kirk is allowed to suggest campgrounds at Tuttle Creek, said Stewardship member Mike Prather, “but there’s no requirement” for visitors to use it.

The Group focused on the Scenic Area designation because of what Prather described as a clear decline in the area, a decline that impacted visitor experience and the health of the landscape. Following a long process of community workshops, the now-legislated designation would allow existing uses but also develop a plan to manage the area.

The Stewardship Group has replanted areas where the semi-primitive campsites have expanded. The Group will continue to do that kind of work, Prather said.

Nelson is optimistic that the final management plan will achieve the balanced goals. “It’s personally important to me,” he said. “I want the Hills in a good spot before I retire.”

Okay the haters are going to hate. I have been driving “Off Highway”, I don’t use “Off Road” to describe my use of dirt roads. To say “Off Road” is to say I am driving where no roads exist, and that would not be true. I drive my highway legal… Read more »

Again with the wild exaggerating dd. Ur really gonna go with u could drive for 8 hrs a day 7 days a week and not drive on the same road twice. Let’s see that’s 56 hrs, even at a snail’s pace of twenty mph on my quad thats nearly 1200… Read more »

….money well spent….if not for FOI,Sierra Club and other environmental groups that carry a lot of clout,our valley would probably resemble Littlerock Dam…turning a once peaceful,quiet camping and fishing area in the Antelope Valley for families to go to into a place to assemble and mud-bog,drink,raise hell,dump trash and fight…totally… Read more »

…Steve,you could drive west on Whitney Portal road to Movie Road entering the Alabama Hills,and if you were to travel the dirt roads OPEN to motorized traffic in the area 8 hours a day for a week,you could do it without being on the same road or turn-out into the… Read more »

Quaque…..All anyone has to do to see what opening up an area to OHV and ORV traffic does is head south a ways….first stop.Red Rock Canyon,about 20 miles south of the Ridgecrest turn-off….the area has been closed to ORV traffic for years,but the damage done back in the 70’s-80’s still… Read more »

Roads in the Alabama Hills have already been closed. And more will be closed. It is the way one group is singled out as the bad guys and the ones that need to be kicked out. Like we should not even have a say. Why do I and so many… Read more »

The visitation is really off-the-charts these days, really picking up within the last five or six years, I think. The “viral” nature of social media is mostly to blame, that and lots of stupid articles in publications like Outside, saying things like you can always find a great camping spot!… Read more »

David dennison, u are exaggerating the situation so much it’s sounding borderline psychopathic. For everybody else I would say go see for yourself and make up ur own mind.

June bug……I’ve lived in Lone Pine for over 19 years,and have gone into the Alabama Hills walking and hiking many times…almost always during the week-days when the crowds of people are less to deal with.Most of the times I do that I come back with lots of trash pick-up,to the… Read more »

Geez David dennison to hear u tell it the Alabama hills are looking like the town dump. As someone who been going into the Alabama’s for many decades it is not the way your describing it. The campers today for the most part clean up after themselves and others. Today… Read more »

Thing about it is,just like with most things,the bad apples ruin it for many…..at times in the Alabama Hills,here come the groups of off roaders speeding on the trails then driving off trail,past the “no motorized vehicle” signs…other times,the guys with their big trucks and tires parked high ON the… Read more »

It is so easy to think hiking people are good people and they should be the only ones to have access. But when you start kicking groups out the end result is the whole place can be closed to anyone not paying at the gate for a guided tour. If… Read more »

“But when you start kicking groups out the end result is the whole place can be closed to anyone not paying at the gate for a guided tour.”

This is a nonsensical fallacy, a strawman constructed to sound ominous but really it’s just a lot of hot air.

I don’t think it is hot air. In my 40 plus years of living in the Owens Valley I have seen lots of roads and areas closed to “Off highway vehicles” in the name of protecting it for future generations. But if it is closed by blocking the road with… Read more »

filbert….realistically,we all know they’re never going to “block the roads” in the Alabama Hills…this day and age,fear mongering for those that try to spin it when certain areas are closed to motorized vehicles.. ..which many areas up there should be…no one is going to restrict people driving on the dirt… Read more »

It is very obvious open camping restricts access to non campers (visitors) , trash is left behind, and sanitary disposal issues, many non rv users dont have black holding tanks. This is a special geologic site and historic site that should be protected from off road vehicles. I recommend designated… Read more »