Joan DeDecker Busby and Carol DeDecker Wiens will sign copies of their recently released book, “Sage & Sierra, A Memoir: Growing Up In Owens Valley,” at the Eastern California Museum, 155 N. Grant Street, in Independence from 1-3 p.m. on Saturday, April 7. 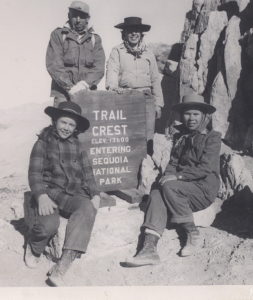 The engaging work revolves around the girls’ “uncommon childhood” in Independence during the Depression and before and after WW II. The “girls” are the daughters of Paul and Mary DeDecker, a well known, author, historian and botanist.

Besides sharing experiences common to most Owens Valley and American families at that time, the book relates how the DeDecker family enjoyed all aspects of small town life and the ability to explore their huge backyard, the Eastern Sierra. Some of the outdoor adventures chronicled in the book include hiking and climbing trips, backpacking and horse packing, and downhill skiing in Onion Valley.

“These are stories to savor. With clarity and immediacy they bring to life the ordinary and the unusual of the sisters’ small-town upbringing,” writes local author and historian Jan Wehrey, who also grew up in Independence. “Individual vignettes, based on their own recollections and the diaries of their remarkable mother, Mary DeDecker, are arranged as alternating voices to reflect each sister’s emerging sense of place in the Owens Valley.” 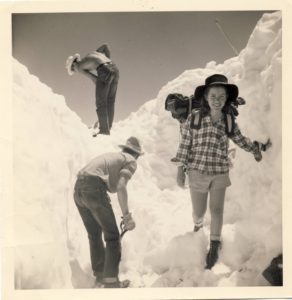 The DeDecker family moved to Independence in 1935. Paul worked for the Los Angeles Department of Water and Power. Mary was a stay-at-home mom who became a self-taught botanist and a respected author and historian.

While mom and dad were busy working, Carol and Joan were busy growing up. They went to school and explored the surrounding land as far as their feet and bikes could take them. The book relates how World War II brought changes, such as rationing, Victory Gardens and more children, thanks to the staff members of the Manzanar Relocation Center moving to Independence.

Eventually, their dad’s love of fishing and mother’s love of plants made it inevitable that they would be spending time in the Eastern Sierra, to fish, to ski at Onion Valley and camp out, accompanied by horses and mules. As they got older and stronger, the girls started to backpack on the John Muir Trail, conquered various peaks and enjoyed the beauty and serenity of the mountains.

“These were the teenage ‘DeDecker Girls’ of my own Independence childhood,” Wehrey notes. “But more broadly, as the authors convey their maturing connections to the natural world, they remind us of the countless and unexpected ways this time of discovery we call childhood can shape the values and passions that define us as adults.”

After graduating from Owens Valley High School in the early 1950s, Joan graduated from Pomona College and met then married Bill Busby. The couple and their four children lived in Mill Valley for more than four decades, where Joan was an elementary school teacher and the couple led Sierra Club sponsored trips into the mountains. Carol also graduated from Pomona, and married Del Wiens, who became a college professor at the University of Utah, in Salt Lake City. The couple has three children.

Copies of “Sage & Sierra” will be available at the book-signing.