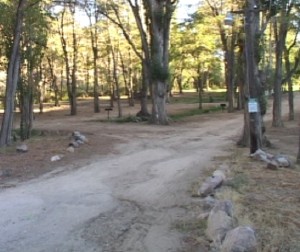 John Hooper’s Rock Creek Canyon housing project will come back to the Mono Planning Commission at some point. Hooper’s plans for twelve houses on one and a half acre lots drew some fire but some praise at the recent commission hearing.

Hooper quickly adds that he will dedicate a number of things that do not currently exist in the mostly neglected area – 5.7 acres of open space, access to the trail for bikes and hikers, a parking lot and a possible interpretive center. He says he would delete most of the non-conforming uses at the creek and add new water lines and fire hydrants.

During the October 14th meeting, Jay Jensen, who said he’s a contractor, called Hooper’s plans “a scheme.” He claimed all the cabins should go, creating a 30-foot setback from the creek for all structures. Jensen described a personal issue. He said he gets “hammered all day long by Mono Community Development. Rules are rules,” said Jensen. He seemed to think Hooper should get hammered by the rules, too.

Although the next hearing on this project was slated for November 5th, reports indicate there may be another delay.

We work to provide daily news to all of the Eastern Sierra, in the tradition of Eastern Sierra News Service and the Sierra Wave. We bring you daily happenings, local politics, crime, government dealings and fun stuff. Please contact us.
View all posts by News Staff →
Bureaucrat Beat: 1984, Nozzle or Not, and Hate Not
Mammoth Town Manager Lays Out Reasons Mammoth Should Win Hot Creek Appeal