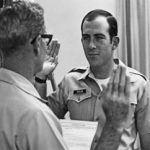 Thaddeus described himself in military as “James Bond on a budget.”

In 1969, at the height of the Vietnam War, Thaddeus Warsaw Taylor III graduated from Arizona State University and joined the Army.

Assigned to the Military Intelligence Corps, Counterintelligence Special Agent, he was stationed primarily in the Republic of Korea.

“Think of James Bond on a budget,” he would say, a reference to his wheeled travel carry-all filled with American cigarettes and bourbon, used to coax subjects for information.

Four years later, a Captain with two commendations, Thaddeus was honorably discharged. He went to work at Dean Witter in the Bay Area as a stockbroker, where he met his wife, Marie. They married in 1976 and three years later, moved to Bishop where Thaddeus started the Dean Witter office.

They settled in 40 Acres at the home they called Fort Taylor, and raised their children, Dan and Sarah.

An avid outdoorsman and fly-fisherman, he became the Inyo County manager for California Trout. In 1985, he was appointed to the Inyo County Water Commission and helped negotiate the 1991 long-term water agreement between Inyo County and City of Los Angeles. He pushed to include the Lower Owens River restoration project.

Greg James, former Inyo County Counsel and Water Department Director recalled, “Thaddeus was particularly forceful when one of LADWP’s negotiators claimed, ‘It’s our land and our water and we can do what we want with it.’ He never hesitated to call ‘BS’ even if the claim was made by the Mayor of Los Angeles …

“He could be outrageous when expressing his opinions—occasionally causing all in the negotiating room to roll their eyes—but it was done in the service of seeking to protect the valley. He was an extraordinarily valuable team member and a very forceful negotiator who always sought to protect the Owens Valley from LADWP’s groundwater pumping, water exports and other water activities.  He donated a huge amount of time and energy to the County and its citizens. We owe him a debt of gratitude.” 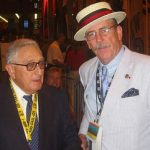 Thaddeus served as Chairman of the Inyo County Republican Party, twice, from 1996 to 2005 and 2007 to 2016. Ron Nehring, former Chairman of the California Republican Party, said, “Thaddeus Taylor was one of those Republican leaders I could call on for ideas and advice.  He wasn’t the leader of the most populous county, or of some faction whose votes I needed, but he carried a lifetime of wisdom and insight upon which I frequently called.”

Two years ago, Thaddeus suffered a stroke. Never fully regaining the ability to walk, he continued to work and write: “Inyo County should continue to be an island of civility in California. We should have government officials who are responsive to its citizens and ever mindful of their responsibilities. Our water resources should be protected, and beautiful environment enhanced because that is what brought us here and gives us strength.”

State Issues Guidance for Campgrounds, Lodging and other Sectors for Inyo and Mono counties
Give me a break! MCWD did…on your water bill!