Ben Prum made the pitch to the Bishop City Council at its August 26 meeting. The site is an existing city parking lot at 151 S. Warren Street. Prum pointed out the location and the 30- to 60-minute recharge time would give Tesla owners an opportunity to hit near-by shops, restaurants and Great Basin Bakery while the car is rebooted. 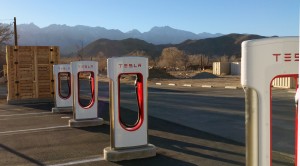 The site is south of Devon’s Flower Patch and west of the parking lot behind La Casita’s.

Warren Street is just off Bishop’s main drag, but Prum said the technology built into the Teslas identify recharging sites—kind of like an in-car billboard advertising Bishop.

The agenda item was just a presentation, not a voting item, but Council members seemed more open to the idea than the 2014 Council that turned down a similar proposition. 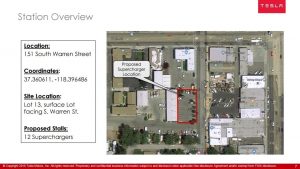 The proposed agreement would start at five years with a 10-year extension. Tesla would maintain or re-plant the existing trees around the perimeter of the lot and install lighting.

According to the staff report, Tesla has been negotiating with the Los Angeles Department of Water and Power to “determine if and how adequate power service could be brought to the proposed site.” 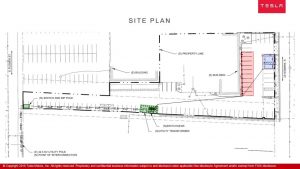 The one concern was the perception of fewer parking spaces in the downtown corridor. The Tesla installation would take the equivalent of four spaces from the existing lot for charging equipment. While the 12 Tesla parking spaces are not restricted to recharging Teslas, conventional vehicle owners may assume those spaces are off limits.

To mitigate that perception, Tesla’s proposal included the creation of three new spaces next to the Public Works shop in an area not currently used for parking. Tesla would also re-stripe spaces once restricted for buses when Greyhound had a station at the location. 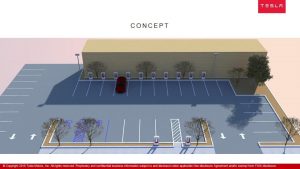 The report goes on to explain aerial photographs between 2006 and 2017 showed an average of 48 spaces occupied in the area where there are currently 124 spaces available.

The next step, according to City Planner Elaine Kabala: the formal agreement between Tesla and the City will be brought back to the Council once the details are finalized. Tesla will go through the building permit process.

According to Prum, installation of the recharging equipment and other work would take six to eight months.

I hope bishop SC will become reality. We have been using Lone Pine and stopping there for lunch and would be super helpful to be able to top off before the climb to mammoth.

Well they are called Super Chargers not re-charging stations and you don’t reboot either. I am a Tesla owner and property owner in Mammoth since the days you made your own change and served yourself at Schat’s at 4 am. A SC in Bishop is a very good idea for… Read more »

Trouble,the way things are going in the World now,do you really think there will be much of a world around in,say 150 years ?…not only will the environment be destroyed or all but destroyed,but can you imagine,judging from just the last couple-three years,the people,seeming so dependent on others (and other… Read more »

David, David, don’t worry we only have 15 more months of Trumps treasonous ways! I’ve learned over years that as soon as the military is done using our latest technology to drop their bombs, we the people usually figure out to make some good uses for it:) Wasn’t this about… Read more »

Trouble….this time I was refering more to the ever changing technology,seems when we learn one thing,it’s time to learn another…cars driving themselves while the driver is asleep….voices inside new cars,to when you get inside,they have to remind you how to back up,put on your seat belt,drive safely,and watch out for… Read more »

I really believe that our great grand kids will be flying in self piloting drones some day. We will probably still need charging stations, but when that happens, the funny part is, we probably won’t need roads or gas stations at some point. Imagine that!

The City of Bishop should work w/ LADWP, Tesla and any other EV charging company to place chargers on one of LADWP’s empty lots in town. Next to Holy Smoke, or the abandoned gas station at the Wye. I believe both of those are LADWP’s and are currently eye sores… Read more »

Let’s get rid of all technological innovation and we can dry up like Bodie… really ? approve Tesla Supercharging stations .. there is no reason not to.

Who’s paying for the electricity? Nothing is free in life.

What are the new charging stations at Vons for?

They are universal chargers. , unlike the tesla who is proprietary.

Why should the government pick and choose wich ev company to endorse. Tesla can build their chargers on private lot. Bishop should build chargers for all EVs not just brand specific. The article mentioned these spots are not limited yo EVs. Will signage mention that?

Bishop isn’t build the charger Tesla is. Tesla is working with the power company to bring in the required power. What Bishop should do is let Tesla build theirs and then work with other companies such as Electrify America to add more generic charging stations. Towns often provide free public… Read more »

Yes. Not to mention providing public property to be used only by a favored few. You’re not going to charge your KIA at the Bishop sponsored Tesla charging station.

Hey Randy, I think your correct. But now hopefully Kia will put some money into our local economy also. I’m tired of Chevoron’s and AM/PMs anyway.

Favored few? They clearly stated the parking spaces are not restricted to recharging Teslas. Sounds like the “favored few” would be anyone with a car looking for a parking space.

I agree with another commenter though, they should provide some signage informing drivers the spaces aren’t restricted.

The charging is for the favored few. If Tesla were to build chargers that all vehicles could use I would say no problem giving them public property to do it. I understand why they don’t. It is a great competitive advantage for the first big mover in electric vehicles to… Read more »

I have a better understanding of your comment now. Thank you for the clarification.

Hopefully they’ll get it right this time. I am currently on a 2,500+ mile road trip in my Tesla, and I only stay in towns/ cities with Superchargers. Bishop is totally missing out on repeat visitors and overnighters by not having Superchargers in town.

“Mammoth station averages 900 charges a month”?
I’m having difficulty believing that one, I bet it doesn’t get half that.

Tinner…believe it. We live right around the corner from the charging station here in Mammoth and every time I walk by there’s anywhere from 3 to 5 cars using it!

Sierra Lady, check my math but are you seeing an average of 30 per day being charged? That’s what it would take to get 900 per month. I’m not opposed the the charging station, it’s probably a great idea considering the increase in electric cars on the road. I just… Read more »

Tinner, you’re probably right! I found him with a quick search of the Internet. https://www.linkedin.com/in/benprum

Sierra Lady, nice work, that appears to be him. I knew he was a schmoozer when he said ”…would give Tesla owners an opportunity to hit near-by shops, restaurants and Great Basin Bakery while the car is rebooted.” “About I am a real estate attorney with more than 10 years… Read more »

I doubt it is BS. I have charged my Tesla there several times. There are usually 3-4 cars charging, which takes 30 minutes. Now multiply 3 cars per hour times 10 hours and you get… 30 charges per day. Math really isn’t that hard.

I too have a hard time believing 900 charges a month for the Mammoth Tesla site.
The most I see there is 2-3 , Maybe mid winter more. Certainly not 900 a month. Thats a 200 charge difference from Lone pine. I Think the guy got is backwards.

Hey , our city council gets a second chance to do the right thing. Congrats