By Deb Murphy on December 7, 2022 in Board of Supervisors, Inyo County, News Releases, Recreation 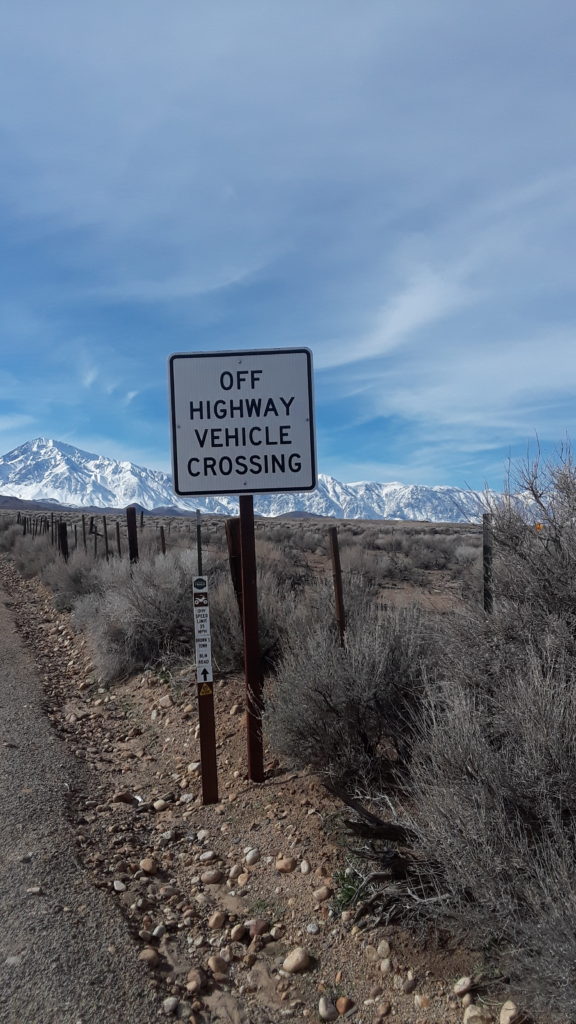 Cynthia Kienitz’s explanation for her attraction to the Amagosa Basin probably rang true to
many Inyo residents. An interior designer, she moved from Chicago to Las Vegas and then
settled in Tecopa. Her reaction to Amagosa: “I thought I went to heaven.”

Kienitz was before the Inyo Board of Supervisors asking that segments, totaling just over four
miles, of a desert highway, be considered for combined use—specifically side-by-side Off-
Highway Vehicles. Her business, Cynthia’s Safaris, run out of her B&;B in Tecopa, provides tours of the Amagosa Basin.

She started her presentation with her background: an interior designer, she moved from
Chicago to Las Vegas, had enough of big city life and discovered Amagosa. She rented a cottage
and converted it to a successful B&B. Kienitz would hike with her visitors, then realized a more
practical way to provide a “total desert emersion” was to host tours of the area in OHVs. “It’s
unfair to think wilderness is only available to young, able-bodied hikers,” she said. There are
designated OHV trails, but, Kienitz said, they don’t connect.

One of Kienitz’ goals was to avoid what she dubbed the Wild-Wild-West Culture: crazy OHV
riders ripping through the delicate desert eco-system. Her goal was to create a culture of care
for the land and the history before the crazies discovered the Basin. As simple as this seems, it
isn’t. Kienitz’ routes did not strictly adhere to designated routes. In addition, not all Tecopa
residents agree with her approach.

Concerns expressed by locals and environmental groups included impacts on the quality of life
for residents and the environment. Tecopa resident Larry Levi was worried OHV use would
disturb the quiet of Tecopa, suggesting the OHVs could be trailered the 800-feet to designated
routes. He also criticized the Bureau of Land Management for lack of signage and maps
identifying OHV trails. The Southern Inyo Fire District also wanted included in any discussions of Kienitz’ proposed project.

Kienitz explained she had made an attempt to contact impacted parties but had gotten no
response.

John Pinkney, Inyo’s deputy director of Public Works, asked the Board for direction in light of
the fact a California Environmental Quality Act analysis would be required. The Board
recommended Kienitz continue to contact and discuss the project with area residents and fire
district staff.

What’s up with all of the typos? Amagosa? Lol

Yea. I don’t see that happening. Most live out here for the quiet, the dark nights and the desert life. OHV = noise, dust and desert damage. With the recent influx of solar fields taking away open range and the pushback by residents I think it will have a tough… Read more »

I really don’ think that the residents that will be effected by her vision of “my increased bank account ” will change their outlook on her proposal . The noise , the dust ,the additional need for visitor parking…? . I’m guessing uh , uh .

Rick
As usual…..all about the money…my bet will be a no-go…

Immersion, not emersion. Why show Mount Tom and Bishop in the photo? Kind of misleading don’t you think?

Pretty sure it’s Amargosa not Amagosa. Why do people move to “heaven” and want to turn it into hell! Take a look Sedona for a preview of what happens when OHV tours are allowed in areas like this. I am a disabled person who loves the spirit of the natural… Read more »

While Cynthia’s idea is a noble one there are far,far more people out there who don’t give a rats patootie about delicate desert eco-systems or the peace and serenity of residents. Heaven would quickly turn into hell. You only have to visit one of the more popular off highway areas… Read more »

desco Yep… Take a look at the Jawbone Canyon area south of Ridgecrest… They “opened” that to ORV’s and motorcycles back in the late 70’s,and now, all but totally destroyed… Another area down there, farther south, Littlerock Dam used to be a great place to bring a family, camp and… Read more »