By News Staff on May 5, 2015 in General Misc. Stories, Public Event

Crystal balls were in short supply at the Tech Group meeting held at the Bishop Office of the Los Angeles Department of Water and Power in Bishop Monday morning to discuss ways to redistribute water within the Owens Valley. 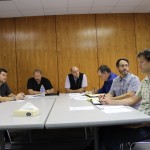 The Tech Group was established under the 1991 Long Term Water Agreement between the LADWP and Inyo County to provide recommendations to their respective decision-making boards. The group was having great difficulty coming up with alternatives to the draconian unilateral cuts that had threatened local ranchers in a recent letter from LADWP which reduced their water allotments by two-thirds. The County was having none of it and threatened legal action. LADWP withdrew the letter and now the department is working with the County and other stakeholders to find other acceptable ways to allocate water and still meet its legal obligations under various agreements and court orders.

The pumping plan for 2015-2016 is in the 70,000 Acre Feet range under which the parties have to analyze the impact on the water table, which as a result of continuing drought conditions, continue to fall, although not a precipitously as might be expected under current conditions. But participants at the meeting warned that, should the drought continue, conditions can worsen quickly.

Allan Bacoch with the Big Pine Tribe expressed concern about pumping in Big Pine and expressed told the group that water efficiency on environmental mitigation projects are important to consider, he felt that fish hatchery operations should also be looked at as well for potential savings. Fish and Wildlife operate their own wells and they would have to be included in any discussions, as would any proposal to reduce water in which there is a current fishery, such as the ponds in the Bishop area and in Independence.

The Lone Pine Tribe representative at the meeting expressed the tribe’s concern over Well #416, which they claim has dropped 6-feet in just the last year.

Some discussion centered on lowering the water level of Klondike Lake, but it was felt it would present a safety hazard to people that use the lake for recreation and would actually not save very much water. Completely emptying the lake would only provide a week-and-a-half of water for ranchers.

Lowering or emptying of some ponds however are possible by migrating the fish to other areas up or downstream and replacing lost fish once the ponds can be reestablished under better conditions.

The Lower Owens River Project holds some promise of water savings by varying base flows and lowering the required 40 cfm requirement to 30 cfm, possibly saving 4,000 acre feet. It would require MOU partners on the LORP agreement to approve any changes.

Adjusting water used on Owens Lake for dust mitigation promises the greatest savings in water. Again, it will require cooperation between the various parties involved with the lake.

None of this is simple, especially during the current severe drought. The Inyo Water Department will be discussing the various options at Tuesday’s Board of Supervisors Meeting in Independence.

Some of the mitigation water is used to stop dust that was blowing across the highway causing multicar accidents. If LA takes that water and there is a serious accident lawyers be on it like a pack of wolves. The Adventure Trail Analysis also only reached one conclusion; that there… Read more »

Air quality still bites when we get a good wind over Owens Lake. cutting back dust mitigation does not seem like a good idea. We should probably post the well levels every month so everyone knows where we stand. There might be a need for DWP to reduce the groundwater… Read more »

Badfinger39;.So true.Ya never know when that ingrown toenail might flare up.

Local Medical Marijuana Growers are Owens Valley Farmers too, speaking of which it’s time to water tha crop because lots of Local patients needs their meds

Don’t mess with the lower Owens. Keep the flow at 40cfm or more.