After leaving his position as Director of the Tri-County Fairgrounds, Jim Tatum took on the job of Inyo County Deputy Public Works Director. As of Monday night, Tatum now has a new job. The Bishop City Council unanimously approved a contract with Tatum for City Administrator. 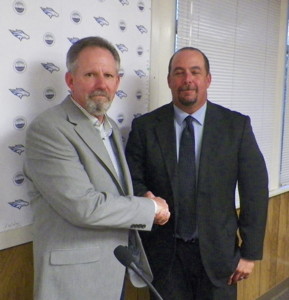 When current Administrator Keith Caldwell announced he would leave his job in the fall to move back to Georgia to care for his aging parents, the Council started their search. They had received numerous applications from both local and out of the area candidates.

Prior to Monday night’s Council meeting, word had spread that Tatum was the local candidate and a Colonel David Buckingham was the out of town candidate.

We work to provide daily news to all of the Eastern Sierra, in the tradition of Eastern Sierra News Service and the Sierra Wave. We bring you daily happenings, local politics, crime, government dealings and fun stuff. Please contact us.
View all posts by News Staff →
Update: Missing boy found in the Sierra
Rescue in Lundy Canyon
22 Comments
Newest
Oldest Most Voted
Inline Feedbacks
View all comments

I was excited that Bishop might benefit from outside leadership and new ideas. And now I’m hopeful that Mr. Tatum can use his years of experience and relationships working in Bishop to revitalize our economy and our community. But I don’t believe he can do that alone, nor would I… Read more »

Bishop Pioneer—Angler-Man–So Sad whatever you call yourself I know for a fact that Chuck Kilpatrick knew nothing of the choices that were being considered, but he(we) knew of a few who had applied for the job by word of mouth and it had nothing to do with our wonderful son-in-law… Read more »

Thanks Benett, I luv the freedom of speech and freedom of the press allowed here. But the good ole boys club won this one. A hundred and twenty grand plus bennies, welcome to Bishop Colonel, now go home. I’m not sure this blog would work so well in a larger… Read more »

Trouble, You are way out of bounds to suggest Jim Tatum could be implicated or involved. Just because you can comment doesn’t always mean you should.

Dee, you may well be correct. I probably should have stayed out of this one.

Angler Man and So Sad are right. “Charles James” is too well informed about the details of the council’s decision regarding the Colonel to be just any citizen. So I ask “Charles James” to name his source. And maybe we should be calling “Charles James” by what many are starting… Read more »

News reporters don’t have to name their sources. Their job is to get information. Mr. James is right about revealing all he can. Benett Kessler

True to a certain extent until the “source” becomes an all to frequent “source” leading one to believe the “source” is actually the reporter’s attempt to turn rumor and bias into factual “news”. When the same reporter (term used loosely) then comments in this feed about how he thinks one… Read more »

John, I give you credit for using your actual name and not hiding behind a pseudonym while trolling this story as so many others have done. Whether as a reporter or citizen, I have every right to comment or write about issues that interest me and those issues that the… Read more »

Yes! I-am-Chuck-Kilpatrick! How clever of someone to have figured it out! Wow! I mean really – thank you! I simply cannot tell you what a relief it is to finally “come out of the closet” as it were. I was afraid that I could not keep up this pretense much… Read more »

I don’t know if Charles James is correct about the details of how the decision was made or not. What I know is that Mr. Tatum did not have the requisite job experience to even make it past the initial screening (nor did he for the job he is leaving… Read more »

It should read “Was he told what was…”

How is it that Mr. James seems to know what was discussed in a Closed Session of the Bishop City Council that pertained to a personnel matter? Was he there? Was he told was discussed by someone who was there? Or was he giving his own opinion about what occurred… Read more »

I would like to know if Mr. Tatum was running the Fair Grounds when the embezzlement investigation started?

Trouble, In answer to your question, the CHP began their embezzlement investigation in August of 2013. Tatum left to become the new Deputy Public Works Director for Inyo County in December of 2012, some nine months prior to the investigation. The Tri-County Fairgrounds board did not fill the position at… Read more »

Congratulations Jim Tatum. This is a loss for Inyo County – but a gain for the City of Bishop. He did a great job when he was the manager for the fairgrounds and as Inyo County Deputy Public Works Director. Plus he is just a really nice guy!

what happened to the colonel sounds like he was offered the job first but some old local business men pressured the city council to give it to tatum? Can you check into that Bennet sounds like the colonel was more than qualified. This city council is looking out for themselves

The retired Colonel had a recent and unfortunate past which proved to be widely publicized on the Internet that undermined his support and resulted in the City Council’s week-delay in announcing their final decision. Council members announced publicly that they were looking for certain qualities in the new City Manager.… Read more »

Mr James is sadly distorting the truth – like the media did to the Colonel. A City Council member told me that the Colonel discussed the internet reports completely with the council at his interview BEFORE the council ever offered him the job. They also said that the city administrator… Read more »