By News Staff on November 2, 2012 in Government Agencies/Utilities 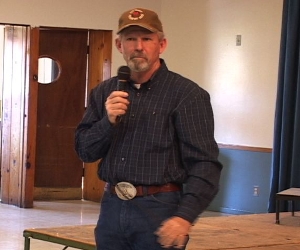 Under his management for the past 20 years, Jim Tatum made the Tri-County Fairgrounds a more vital part of the community – including a new, spacious building. Now, he will move on to a new job with Inyo County.

Tatum confirmed the word that had circulated – He is Inyo County’s new Deputy Public Works Director. Tatum called the move “a world of opportunity with a huge number of challenges. It’s the next step in my life,” he said. After the investment of 20 years, Tatum said he hopes to stay involved and be the “best volunteer the Fairgrounds ever had.”

Looking back over his time at the Fairgrounds, Tatum said when he started things were less than positive. Money was tight. He said, “With hard work by the people here, the board, and the community we’ve made it a success. I’m proud of it. It is my legacy.”

Did state budget cuts enter into his decision to leave? Tatum said his position could still be funded but would then require a “very noticeable cut in services and a decline in quality.” He said his position will not be filled. He assured that current employees and some additional part-time ones can handle the duties. Tatum said, “The employees here are fully capable of not just maintaining things but also moving forward.”

Tatum said the office manager will continue and take over events’ planning. Maintenance people will continue, and he said board members will likely play a more active role.

One of his major accomplishments is the new building on the Fairgrounds. Tatum said he expects it will generate a lot of revenue as a new, modern venue for almost any kind of activity. “The fairgrounds will remain a vital part of the community,” he said. Tatum expects to start with Inyo County December 3rd.

Thank you for a wonderful expression of all the great things about your dad Jim Tatum,we have enjoyed knowing him from Mule Days and the Fair…James and Lisa Fergason, Sanger, Texas

I remember my parents telling me 20 years ago that my dad had accepted a job as the Eastern Sierra Tri-County Fair manager. My 7-year-old mind could not have grasped then the impact that decision, over the next two decades, would have on my community, my family, and my developing… Read more »