Press Release – The world-class rock art found in the Coso Mountain Range ranks as one of the most important and impressive petroglyph sites in the West.

The Coso sites represent the largest concentration of rock art in North America. But since the art is located on the restricted land also holding the China Lake Naval Weapons Station, it takes some time, effort and planning to get a tour of the stunning examples of this enduring, ancient art. 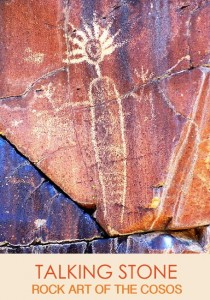 That means this world-class artistic and prehistoric resource is not as well-known or well-visited as other, more accessible rock art sites.

Fortunately, viewing a documentary film is one way to take a virtual tour of the Coso sites and explore the world of Coso Rock art. The hour-long documentary film, “Talking Stone: Rock Art of the Cosos,” takes viewers on a journey among the stunning examples of this prehistoric art form. The tour guide for the trip is anthropologist/archeologist Dr. Alan Garfinkel, a recognized expert on Coso rock art.

“Talking Stone: Rock Art of the Cosos,” will be screened free to the public on Sunday, July 26, at 5:30 p.m. at the Independence Legion Hall, at the corner of US 395 and Kearsarge St. in Independence. Dr. Garfinkel, who also served as the executive producer of the film, will be on hand to answer questions after the screening. 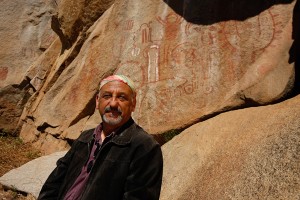 Prior to the film, Dr. Garfinkel will present a talk and slide show about the petroglyphs and other rock art found in the Coso Range. He will also be signing copies of the numerous books he has written. The presentation will begin at 3:30 p.m., at the Eastern California Museum, 155 N. Grant St., in Independence, and is also free and open to the public. The film screening and presentation are sponsored by the Friends of the Eastern California Museum.

Besides Dr. Garfinkel, “Talking Stone” features a number of experts well-versed in the Coso rock art sites and prehistoric petroglyphs and art. Several other archeologists offer their insights about the rock art, including the head archeologist at China Lake. Also included are Native Americans and representatives from the Maturango Museum in Ridgecrest, which sponsors the official tours of the China Lake petroglyph sites.

Dr. Garfinkel has studied and written about rock art sites for years, and is a recognized authority on the Coso Range rock art tradition and the Coso region’s prehistory in general. He has written five books, including Prehistory of Kern County, Archeology and Rock Art, and the Handbook of the Kawaiisu. He is also the author of 47 scientific articles in various academic journals. Dr. Garfinkel was awarded the California State Governor’s Award for Historic Preservation in 2008 and 2011.

After receiving a BA at CSU Northridge and a MA and Ph.D. at UC Davis, Dr. Garfinkel worked for private firms and numerous state and federal agencies.

We work to provide daily news to all of the Eastern Sierra, in the tradition of Eastern Sierra News Service and the Sierra Wave. We bring you daily happenings, local politics, crime, government dealings and fun stuff. Please contact us.
View all posts by News Staff →
Inyo Supervisors approve RFP for EMS; move on boat tax
Inyo County Elections among News Challenge winners
1 Comment
Newest
Oldest Most Voted
Inline Feedbacks
View all comments

From world class prehistoric art to tagging . Wish they’d make up their minds.