By News Staff on November 15, 2013 in Government Agencies/Utilities 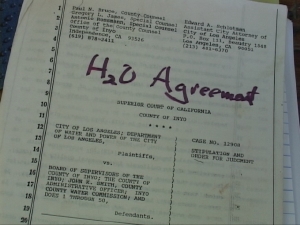 Inyo County’s Water Policy adopted in 1999 spells out the duties of the Inyo Water Commission, which could be summarized as environmental watchdogs over the Long Term Water Agreement. The Supervisors will appoint two members to that Commission next month and the Commission itself will meet Monday.

According to the Board Clerk, five people, at last count, had submitted applications for appointment to the Commission. The names will remain confidential until the Board of Supervisors learns who they are. The some-twenty-five year history of the Commission has seen appointees who mostly do not make waves, with some exceptions.

The seats of Commissioners Mike Carrington and Sally Symons are expiring and became available for appointment. The Supervisors are expected to make the two appointments in December.

Speaking of the Water Commission, that group planned to meet Monday at 6pm at Statham Hall in Lone Pine. The agenda includes a report on Blackrock 94 – the wellfield that the Inyo Water Department says has been significantly damaged by DWP’s groundwater pumping. Recently, a three-man arbitration panel rejected some of DWP’s claims to get out of having to deal with Inyo County’s formally filed dispute.

The Commission will also hear a report on the Lower Owens River Recreation Use Plan environmental review process. That plan spells out options for improved recreation along the river. Each of three alternatives describes portals to the recreation area along Highway 395, a Lower Owens River trail, birding trails, river access for non-motorized boating, picnic areas and signage. Choking amounts of tules in the river currently make recreation a challenge.

So far, the Department of Water and Power has not offered to pay for creating a better Lower Owens River. In contrast to Inyo County’s problems just accessing the Lower Owens River, the City of Los Angeles now moves ahead on with the Los Angeles River Restoration Project, including extensive greenery, landscaping, marshland habitat, walkways and bike paths with restoration of 11 miles of the river from near Griffith Park to downtown LA.

Back in the Owens Valley the Water Commission will talk about modifications to the Van Norman Enhancement/ Mitigation Project. Commissioners will also make plans for their next meeting in southern Inyo.

The Lower Owens River Recreation Use Plan has tremendous potential to invigorate tourism and encourage greater local use by residents. Unfortunately, little attention is being paid to it. It does need to have support for volunteer river stewards, greater support efforts from the county, and involvement from fishing, boating, and… Read more »

Mike, Sorry about that. I was quoting the Water Department.
Benett

The interpretive panels at the newly refurbished Echo Park Lake in Los Angeles state that the LA River flows would fill the Rose Bowl each day. That is the exact description that LADWP uses in describing the ‘wasted water’ at Owens Lake. If LA captures that flood runoff, they offset… Read more »

Thanks Benett. Interesting to note that while the City is required to maintain a flow of 40 cubic feet per second in the lower Owens River, much of which is pumped back into the aqueduct for export, the Los Angeles River dumps an average of 200 cfs, or something like… Read more »