The Taboose Fire was mapped 10,500 acres with 10% containment. Aircraft was able to fly and accurately map the fire today.

Today, the fire showed significant growth, predominately to the west and north. Crews focused their efforts to protect nearby communities, constructing containment line on the north, east, and southern flanks. They were aided by retardant and water drops from air tankers and helicopters. Thick smoke obscured some of the fire’s edge on its west and north flanks. Fire behavior was active today.

The typical evening down canyon winds associated with the Eastern Sierra remain a concern for tonight. Crews will patrol fire lines and continue working to protect neighboring communities. There is a red flag warning for high winds in the forecast for Monday evening through Tuesday morning.

Baxter Ranch is under a mandatory evacuation and Birch Creek, Aberdeen and Taboose Creek Campground are under voluntary evacuation advisories. Tinnemaha Campground is closed and being used for incident response.

Birch Creek Trail, Red Lake Trail, and Taboose Creek Trails are closed. The forest continues to work with Inyo County Sheriff and Sequoia and Kings Canyon National Parks to locate hikers in the area. Four vehicles were destroyed at the Red Lake Trailhead.

The public is advised to avoid these closures and the nearby fire area for their safety and to aid in safe response for firefighters.

The fire is being managed in unified command with Inyo National Forest, CAL FIRE and Inyo County Sheriff’s Office. A Type II Incident Management Team has arrived and was briefed on the fire at 6:00 pm. The team will assume command of the incident tomorrow at 7:00 am.

The fire started the evening of September 4. It located southwest of Big Pine and northwest of the community of Aberdeen and its ranging from 5,000 ft in elevation in sagebrush and has spread up hill to 10,000 ft. in mixed conifer forest. The cause of the fire is under investigation. However, it is likely lightning-caused.

Last night, the Taboose Fire jumped its containment lines when sustained 40-50 mph winds caused spot fires. The fire is estimated to be 4,000 acres with 10% containment. 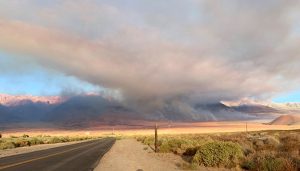 Last night, firefighters focused on structure protection for the nearby communities. Extreme fire behavior has been observed.

The Birch Creek Trail, Red Lake Trail, and Taboose Creek Trails are closed. The forest will work Sequoia and Kings Canyon National Parks to locate hikers in the area.

The fire is being managed in unified command with Cal Fire and Inyo County Sheriff’s Office. A Type II Incident Management Team has been ordered. Numerous orders for fire crews, air tankers, and other resources are in place.

Today, winds remain in the forecast and are the primary concern for fire response as is the steep terrain of the Eastern Sierra.

The fire started the evening of September 4 at approximately 5,000 feet in elevation in sagebrush. It located southwest of Big Pine and northwest of the community of Aberdeen. The cause of the fire is under investigation, however it is likely lightning-caused.