By News Staff on February 17, 2013 in Government Agencies/Utilities 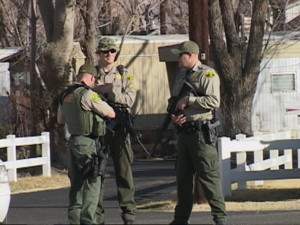 It all started as a domestic problem and then a reported overdose, but an incident at Shady Rest Trailer Park in Bishop turned into a day-long stand-off with a man in a mobile home who had threatened to shoot police.  The Special Operations Team of local officers got the man out of the house just after 7pm Sunday.

Bishop Police Chief Chris Carter said that police had responded to a domestic dispute call Saturday involving 56-year-old Arnold Patzkowski and his girlfriend. Chief Carter said that Sunday someone called 911 to say the man had overdosed on medications. Officers and an ambulance responded but Tatzkowski yelled out that he had a gun and would shoot police.  He barricaded himself in the motorhome he lives in. 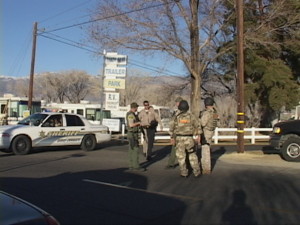 Bishop Police, Inyo Sheriff’s Deputies, and Highway Patrol Officers descended on the trailer park.  Residents were evacuated and so were homes on the north side of Yaney St.  As the sun went down, the man had still refused to come out.  SWAT team deputies and officers, armed with AR-15s, stood around the park and had formed a perimeter around the man’s home.

He was heard moving around inside but had failed to come out. Reports said it may all have started over a break-up with his girlfriend. The tense situation dragged on. One of the residents, Phil Barfoot, said, “I’ve lived here about 12 years.  It’s not often something like this would happen here.  It’s shocking.  I hope we can resolve it in a hurry and get back in our homes.”  Mr. Barfoot’s 91 year old mother was too ill to evacuate and waited for authorities to bring her out.  Residents of the area were taken to the Bishop Senior Center not far away, helped with medications and medical issues and given vouchers for motel rooms and food.

Manager of Shady Rest, Robin Hansen, said this was an incident very unlike the usually calm residential area.  He said, “Everybody’s nervous and upset about this.  It’s unfortunate this happened here, but things like this do happen nowadays.” Some officers mentioned the Christopher Dorner incident in the Los Angeles area where officers were shot trying to capture the suspect.

Then close to 7pm officers threw what’s called a pepper ball into the motor home, giving off a chemical powder.   Patzkowski still didn’t come out.  Chief Carter said that a team of officers breached the front door and physically took him into custody.  Reports were confirmed that officers used a less-lethal bean-bag gun on Patzkowski.  Officers did not find a gun.  Patzkowski was transported to Northern Inyo Hospital, and Chief Carter said he would be booked in the Inyo County Jail at some point.

Thankfully it ended with out any innocent people or the gentleman in the story getting seriously injured. Is it just me or is every law enforcement station on high alert because one of there own lost it in the name of vengeance. Of course it could have been handled differently,… Read more »

Telling cops you have a gun because you don’t want to go to jail… never works.

He could have just told them he was fine and get lost.

You are correct Benett, but it does say they were called for a overdose. From what I heard he took a bunch of pills after fighting with his girl friend.

The incident in Big Bear was handled with professional police tactics.. …He had the chance to surrender but chose to shoot countless rounds at the police…He picked the time and place that he was going to die… He was a extreme danger to society and and we are better off… Read more »

Roy…I agree with what you say….But…..I just think it would be better….and look better….if San Bernardino Law Enforcement would just come out and say there was no way this guy was going to be coming out alive….once he went into that house,minds were made up….I knew the house was gonna… Read more »

Wayne, Just a thought – LE’s lawyers likely train them on how to publicly express many, many things.
Benett

That is probably true…..But what comes to mind,in 2002,when the two girls were kidnapped in Quartz Hill and driven to the Lake Isabella area by Roy Ratliff.When they were discovered in a vehicle by Animal Control,and Law Enforcement arrived,Mr.Ratliff waved a pistol,was shot 9 times and was killed.The Kern County… Read more »

wayne- the article says he had no gun and was possible suicidal. The only life he really destroyed was his own. Please stop comparing him to Dorner. He was scared of the police and didn’t want to go to jail, not out to get them.

Our story did not say the man was suicidal. It did say police found no gun.
BK

Trouble….I agree with you,a far cry from the problem with Dorner…but there are comparisons….According to the reports,he threatened to have a gun,and shoot police….he was barricaded in a home…I’ll bet Law Enforcement didn’t see it as a non threat.To ALL posters,I’m NOT defending Christopher Dorner…just saying it seems it could… Read more »

I’m not complaining about it, just stating a fact.

If you did that, Wayne…you’d be out of a job Some things are better left un-said.

Thanks to all the agencies swat,chp,bishop police they did a good job apprending the man barricaded. It is always so quiet here at Shady Rest.But Sunday was way too much excitement for all of us so good to be home.There is a new appreciation for home sweet home! And thanks… Read more »

You know what bothers me? What kind of people are those 3 that disagreed with Diana Harris post?

Bob K. I want you to know that I am one of those people that disagree with you. I have known Arnie for several years and he is not a monster. Thou it sounds like Arnie really lost it lately, a few years back he would have been willing give… Read more »

..Good job by Inyo County Sheriffs,CHP and other agencies,taking care of a problem that could have turned out really bad…and not like how other incidents such as this were handled by our neighbors south of us we all read about,and saw on the news last week in Big Bear.

Thank you and God Bless all our wonderful police officers for protecting our community in our small town of Bishop.