By News Staff on February 27, 2014 in Government Agencies/Utilities 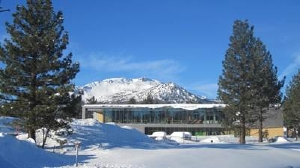 In a lengthy hearing in Mammoth Court earlier this week, attorney Doug Buchanan won a motion to suppress evidence seized in a traffic stop by Mono County Sheriff’s Officers. The District Attorney’s Office will consider whether or not to appeal.

This is the case of Youssef Boulaalam. Details of this case went public when Attorney Allen Berry filed a claim against Mono County alleging violations of civil and constitutional rights surrounding the traffic stop of Boulaalam and the search of his vehicle. The officers claimed they thought the man was under the influence but did not investigate that claim when they stopped him. The officers instead searched his car and seized two guns, according to the claim filed and as is evident on the officers’ dash cam DVD of the arrest. The District Attorney’s Office filed a misdemeanor charge of carrying a loaded firearm in a vehicle.

Attorneys Doug Buchanan and Allen Berry filed a motion to suppress the firearm evidence based on the claim that there was no probable cause to stop their client and to search his car. Buchanan argued for the motion. Assistant District Attorney David Anderson argued against it, and the issue was heard by Judge Mark Magit. The Judge granted the motion to suppress the evidence. It was reported that Mr. Anderson said the DA’s office would consider if the decision would be appealed.

In the matter of the claim filed against Mono County, the Board of Supervisors recently rejected it.

Just to clarify for everyone probable cause is not needed to make a traffic stop.

Try Reasonable Suspicion. They did not have that either.

Reasonable suspicion that can be articulated is needed for traffic stop. Probable cause, or consent, is required for search. Judge may have thought the “reasonable suspicion” was weak ruse to justify stop and search as officers did not pursue DUI investigation. Never consent to searches, especially if you are innocent.… Read more »

I know what lady I’m voting for in June!!

I say is this is the perfect example of why a new sheriff should be voted in!

I concur…it’s ANOTHER huge nail in the coffin for the Obie Administration. BYE BYE!

Wayne: You’re usually smarter that. You are the one trying to throw politics into this. This is all about probable cause to be stopped and searched….But nice try anyway.

Big surprise! Local law enforcement stopping someone on trumped up charges only to turn around and prosecute for another reason….Amen to what “Trouble” said.

Why am I thinking this stop,search and arrest here is going to lead into a conversation about some of those drug busts that were made up in the Bridgeport area the past couple -three months ?….thing is,with this case,bottom line is it’s AGAINST THE LAW to be carrying a loaded… Read more »

There is another issue. Probable cause to be stopped and searched in the first place. That was the issue of this particular hearing.
BK

Benett….maybe I’m mistaken,but didn’t it say he was driving 45 MPH,and nervous with Law Enforcement behind him ?……was this stop made on HWY 395 ?….and ,if so,if someone is driving 45 MPH..on HWY 395..and,if nervous with a patrol car behind him,probably looking in his mirror,and maybe not staying in a… Read more »

Judge Magit found there was not probable cause to search Mr. Boulaalam’s vehicle. I was not in court, but from what I know about the case, it was apparent that the officers, though they said they thought he might be under the influence, did not pursue that idea when they… Read more »

Wayne, you should not be so quick to give up your Constitutional Rights (4th Amendment) that many brave men have fought and died for you to have.

You are conditioning yourself to be a good little sheeple who will not stand up to wrongdoing by the government.

.Snowman…written WAY back in something like 1779….long before the days of people transporting illegal drugs, caches of firearms,stolen property,and putting peoples lives in danger,mainly Law Enforcement’s lives, by doing so…here’s all I got left to say about this arrest….if this guy had obeyed the laws,and not been carrying a loaded… Read more »

Wayne, you have missed the point of law that officers can not search whenever they want to. That is one of our constitutional rights. That is the point of this case. There must be probable cause. Neither your nor I were there, but evidence before Judge Magit convinced him that… Read more »

Wayne, if the officers had done their job professionally, they would have made a good arrest. Luckily, this guy doesn’t seem to be OJ Simpson.

Wayne, what you are saying is Deja Vu all over again. If this was 1776 you would have been a loyal subject to King George until the bitter end, not a Patriot who fought search without a warrant and seizure of their firearms by the government. The result of this… Read more »

Wayne you seem to want to write the next “Supplemental Report” for them, maybe you should. You have just about as much credibility as they do. LOL

Even Wayne should be able to understand that!

Wayne, check out this link, especially the slide show on people killed by the ‘war on drugs’. http://www.huffingtonpost.com/2014/01/03/marijuana-overdose_n_4538580.html#slide=2358701 It drives home the point of how important it is for our LEO to toe the line. Come on dude, love our country…support the well thought out safeguards our forefather’s so carefully… Read more »

sugar magnolia…..I’m not gonna say anything more about this case,other than replying to one of your sentences’ in your above post you made…stating “the America our forefathers envisioned” back from 1776 thru 1789…..something tells me the world,or America today isn’t what they saw coming back 225+ years ago….as far as… Read more »

Oh my Gosh Sugar,
I looked that that horrible sideshow.

Right on Benett! This is a classic “Fruit of the Poisonous Tree” case.

This a legal metaphor in the United States used to describe evidence that is obtained illegally and it therefore cannot be used in court.

Wayne, your right about the loaded weapon issue! It is against the law to have a concealed weapon in your vehicle! However, probable cause for the stop was shady at best! No effort to even conduct field sobriety evaluation existed! Come on, then to produce a supplemental report stating your… Read more »

Are you serious? Do you have any idea how clogged the system is and any idea of how the adversarial system works? If it were that easy to sue, everyone would be doing it. Litigation is not for the faint of heart, dude, and most people go out of their… Read more »

“These guys that camp…they always have guns”… THAT was their probable cause, and they got nailed for it by their own audio recorders. SO, if you’re driving up or down 395 anywhere from Tom’s Place to Topaz, if you’ve got any camping gear visible, be prepared to be jacked by… Read more »

First off, Mono County is very lucky to have two very good and very honest judges with Stan Eller and Mark Magit. The fact that the deputies wrote the supplemental report describing the probable cause for the stop months after the incident is incredible. The best they could come up… Read more »

In the know
Reply to  Snowman

The law finally got caught doing exactly what we all know they have been doing for the last ??? years. We call it cherry picking in sports.

I Love To Fish
Reply to  Trouble

I’m so glad that the MCSO is busted on this. This has bee going on for YEARS!! YEARS!! I hope MC Sheriffs and all LE start following the law, and stop thinking they’re above it. We have rights!! and LE has Laws to follow just like we do. This is… Read more »

Legal Eagle
Reply to  I Love To Fish

ILTF, you should contact Mr. Boulaalam’s attorneys and advise them of the hard evidence that you possess. This shows a prior similar act and a pattern of civil rights violations by MCDS and the Sheriff and Assistant Sheriff that promote these types of illegal acts. You could become a party… Read more »

I Love To Fish
Reply to  Legal Eagle

Legal Eagle,
Thanks for the advice I just called him. ;P