By News Staff on February 18, 2016 in General Misc. Stories, Government Agencies/Utilities, Public Event
By Deb Murphy
The Inyo County Board of Supervisors acknowledged the complexity of water issues in Inyo County at Tuesday’s meeting. What it didn’t do was accept recommendations presented by Water Commission Chair Mike Prather and Commissioner Craig Patton. 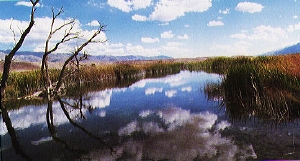 While the details of mitigation projects, groundwater basins and pumping impacts may be complicated, to Prather the Commission’s recommendations were a matter “of drawing a line in the sand. This list (of projects) has been an open wound for some time. There is widening concern by citizens.”

The Supervisors, though aware of public sentiment, wanted more detail, more caution.
At its January 27 meeting, the Commission chose the McNally Ponds and Pasture Enhancement/Mitigation Project as its top priority. Prather explained the short list, culled from a long list of projects, included Five Bridges and Laws, but some progress has been made in the Laws well fields.
Mitigation for groundwater pumping at McNally was to provide water in the winter for
water fowl habitat and irrigation for forage in the pasture.
According to Prather, the berms and plumbing have been for 24 to 25 years. “For 16 of those years, the project had no water; four years it had reduced water, some of the reduced flows with agreement from the County,” Prather said. “We need to force the issue if necessary.”
According to Prather, the Los Angeles Department of Water and Power has cited reduced water from Mono Basin as the reason behind the waterless McNally project. Speaking for himself, he said “we need to make this work or get it off the list. Move the water somewhere else.”
Supervisor Mark Tillemans “pressed for caution. What we’re battling is the central command,” he said. “The City of Los Angeles.” Supervisor Dan Totheroh wondered if “by prioritizing, will we lose somewhere else.” Chair Jeff Griffiths “wants to see more solutions. It doesn’t have to be a detailed plan,” he said.
Next up: Patton with the Commission’s recommendation that the Board “not permit any new LADWP wells until existing obligations… have been met.”
LADWP has proposed four new wells, B-5 in West Bishop, B-2 by the Gun Club, in Bell Canyon above Big Pine and a replacement well in Laws, identified in the Long Term Water Agreement with 20-plus year old California Environmental Quality Act analysis.
The department also proposed retrofitting two wells at Five Bridges to pull only from deep aquifers. Those wells were re-classified as new wells, requiring CEQA, but not included in the agreement’s list of 15 approved new wells.
The Five Bridges wells were shut off in the late 1980s following serious vegetation impacts. Water Department hydrologist Keith Rainville told attendees at last week’s field trip a pump test was conducted in the mid-1990s, running at 16 cubic feet per second for 60 days with a drawdown from 16- to 3-feet.
According to Patton, the Technical Group recommended the wells be permanently shut off.
“We need to get in front of Los Angeles as they proceed,” Patton told the Supervisors. “We don’t want to wake up one day and find they’ve put in those wells…. The County needs to be prepared to go to arbitration.”
In response to a question from Totheroh, Patton said one of the new proposed wells, B-5, would be used on mitigation projects and would take the stress off Bishop Creek runoff. In addition, the Bell Canyon well will provide water to the Big Pine Ditch system which has been supplied by surface water.
“I appreciate your hard work,” said Griffiths, “but there’s a lot in ‘the county should not permit.’ It’s complicated when you get lawyers involved. There’s difficulty in linking new wells to mitigation. But it’s important the Water Commission stay on top of this.”
Supervisor Rick Pucci came the closest to accepting the recommendations. “No new wells is politically right,” he said, noting Prather’s reference that while mitigation is invaluable, “we have to avoid situations where mitigation is required.”

“The Inyo County Board of Supervisors acknowledged the complexity of water issues in Inyo County at Tuesday’s meeting. What it didn’t do was accept recommendations presented by Water Commission Chair Mike Prather and Commissioner Craig Patton.” It’s interesting how people can watch the same BOS meeting, but then disagree on… Read more »

Phillip, i would appreciate knowing what you would try to do if you were on the commission? I ask out of respect of your knowledgeable responses over the years.

The great works of Mike Prather and Craig Patton and the Water Commission are vital and greatly appreciated by nearly every constituent of our Supervisors. There are no easy answers or simple solutions to the issues of the DWP in the Eastern Sierra but there is a whole lot of… Read more »

This was happening with the “Lower Owens River Project” it took a judges order to stop water flowing in the second aqueduct until the LORP was completed. This worked so well that DWP finished the LORP in record time. I say if it work so well before let’s do it… Read more »

It is not complicated. Removing water from areas that naturally have water has adverse effects. Mitigation begins and ends with leaving the water where it is meant to be, naturally. =