As we had reported, Mono Supervisor Byng Hunt made a comment at a public meeting which basically broke the news that Mammoth Police Chief Randy Schienle has been in talks 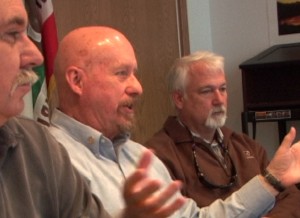 with the Town Council over his retirement. Hunt confirmed his comment and talked about the possibility of Mono County handling some of Mammoth’s law enforcement needs.

It was at a meeting of the Town-County Liaison Committee that Supervisor Hunt said he had heard that Randy Schienle was retiring at the end of June. Hunt said he thought it would be a good time to talk about restructuring of the Mammoth Police Department. Other officials told Hunt that it was premature.

Supervisor Hunt said the issue of Law enforcement, Mammoth, and Mono County have been on his agenda for a long time. He said the departure of the Chief would provide an opportunity for Mono Sheriff’s Officers to co-ordinate with Mammoth, take over duties or help out. “We could consolidate efforts,” said Hunt, “for the good of public safety.” The Supervisor also pointed to hard budget times and the need to save money.

Hunt added that Sheriff Rick Scholl has background in the Mammoth Police Department and is “well versed on the opportunities that might exist.” Hunt did emphasize that there have been no formal discussions about this issue within Mono officialdom.

Chief Schienle did confirm that he is in talks with the Town about his retirement. Other officials said they could not comment at all since this issue has unfolded in closed sessions of the Town Council.

No one, so far, is saying why the Chief has considered retirement at this time.

We work to provide daily news to all of the Eastern Sierra, in the tradition of Eastern Sierra News Service and the Sierra Wave. We bring you daily happenings, local politics, crime, government dealings and fun stuff. Please contact us.
View all posts by News Staff →
New Year’s Assault Case Set for Settlement Conference
The Owens River is Cleared For Stocking