Two separate families, who each spent the week-end at family weddings, were headed home in opposite directions. They were jarred out of their happy moods when the two vehicles collided in the two-lane section of Highway 395 south of Big Pine. 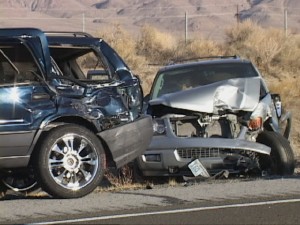 Ambulances and rescue crews from Bishop and Big Pine rushed to the scene after the location was determined. Numerous motorists had called in reports with conflicting information. The accident happened a couple of miles south of Poverty Hills.

Bill Beckman of Fallon was at the wheel of the vehicle traveling north. Beckman told KSRW's Benett Kessler that he saw a navy blue jeep spin around in front of him in the two-lane section, ending up in his lane. Beckman said he tried to move over to the right to avoid a crash but the other car kept moving too, and he hit it hard on the left rear side.

Mr. Beckman said no one in his car was hurt. He said everyone was wearing a seat belt and air bags deployed. The people in the other car were not so lucky.

The CHP confirmed that three people in the jeep were not wearing set belts and they were ejected. Only the driver was belted in. A 9 year old boy and a 14 year old boy received major injuries when they were thrown from the jeep.

The Beckman's were driving back to Fallon from a San Diego family wedding, and, ironically, the Murillo family in the other vehicle were driving home to Colton after a family wedding in Carson City. The Murillos were traveling in 3 vehicles, and the CHP said that they were all in a "fatigued condition." The 21 year old woman driving the accident vehicle was described as "unlicensed and fatigued." The CHP said she allowed the jeep to drift off the highway to the west, over corrected back onto the road, lost control and went into a spin, crossing the highway where Mr. Beckman braked hard to avoid her but hit the jeep. This caused the jeep to spin around and hit Beckman's car in the back.

At the scene, the CHP said that four people were injured – from minor to moderate or major. Symons Ambulance and Big Pine ambulance transported the injured to Northern Inyo Hospital.

Traffic was backed up for a few miles on both sides of the accident scene as volunteer firemen let one lane go through at a time. The accident happened at around 4pm, Sunday.

We work to provide daily news to all of the Eastern Sierra, in the tradition of Eastern Sierra News Service and the Sierra Wave. We bring you daily happenings, local politics, crime, government dealings and fun stuff. Please contact us.
View all posts by News Staff →
Mammoth Huskies upset Bishop
Bureaucrat Beat: From Bats to Bugsy, Verizon Vituperation and Villaraigosa’s Trees