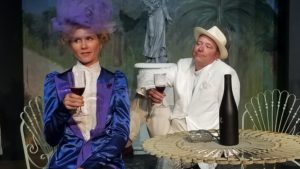 “This is a play I’ve long wanted to perform,” stated McDonell Page who plays the lead character Alma, “and I appreciate the opportunity to collaborate with MLRT to make the experience happen not just for me, but for our community. It’s also a thrill for me to know that Alma was for Williams the favorite character ever wrote. His gift of portraying people in conflict and heartbreak is an inspiration.”

One of Tennessee Williams’ most subtle and tender works, Summer and Smoke explores the conflict between the hedonistic body and the lofty spirit. Set in Mississippi, Alma Winemiller, the minister’s daughter, has grown up loving the boy who lives next door: John Buchanan, the doctor’s son, is a wild, adventurous, mischievous pleasure seeker. He spends the hot Mississippi summers drinking, gambling, and romancing. Alma, on the other hand, is quiet, eccentric, and high-strung; aspiring to lofty spiritual goals and holding to strong moral standards. Despite their differences, John and Alma are magnetically drawn to each other, and the spiritual and physical romance that almost blooms between the two of them is among the most engaging, romantic, and heartbreaking love stories in Williams’ canon.

“When Allison suggested this play as a co-production after the success we had last year working together, it was an easy agreement. It’s an opportunity to collaborate with other arts organizations,” stated Dubrovner who takes on multiple roles in the production, both on and behind the stage. “Our community deserves quality entertainment and I’m grateful to be able to extend the MLRT season with this collaboration.”

Directed by Juliana Olinka Jones, an MLRT regular contributor, the large cast, includes several newcomers to the Edison Theatre stage. “We did a large casting event in the fall for the seasons of both theatrical companies and so many talented young people who came out for the roles of Young Alma and Young John Jr. that I double cast them. I’m excited to be directing people I’ve worked with before and people I’ve seen on stage but am working with for the first time in addition to those making their debut.”