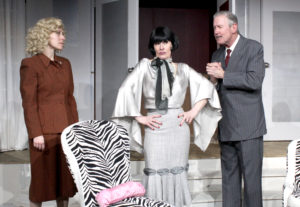 The play features two battling Hollywood divas who wind up unknowingly sharing the same suite in a Palm Beach Hotel. Five doors, two bellhops, two assistants, a frustrated Hotel Manager, a Society doyen–who likes to host our “boys on the battlefield” to “blow off a little steam,” a nosy reporter and one dog. What could be simpler?

“I love directing comedy,” stated Dubrovner. “It’s such an amazing collaboration between the writer’s script, the actors and the director to find every humorous moment. And in a farce, the more frantic, but real the actors remain, the funnier the experience is for the audience.” 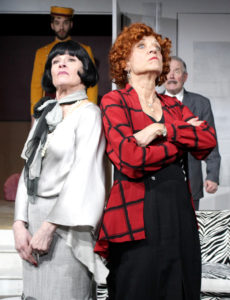 The show features a roster of local talent from experienced locals, to those making their Mammoth premiere after a lengthy hiatus from the stage.  As the battling divas Claudia McFadden and Athena Sinclair are Juliana Olinka-Jones (Importance of Being Earnest, Lend Me a Tenor, The Fantasticks) and Lisa Gil(I Hate Hamlet, Little Shop of Horrors) respectively. Stephen Gill (Importance of Being Ernest) portrays the harried Hotel Manager Mr. Dunlap, whose challenges with divas in the same suite are compounded by the owner’s wife, society matron Mrs. Osgood, played by Rhonda Duggan and meddling gossip columnist Dora Del Rio, played by Victoria Farber—both of whom are making their Mammoth debut. 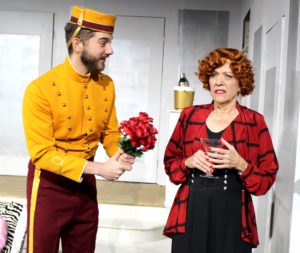 Rounding out the cast are the divas’ assistants, lovesick Murphy managing diva Sinclair played by Airen Neely Chaconas (SCT’s Macbeth and Picasso at the Lepan Agile) and long-suffering Pippet played by Sam Taylor (SCT’s Macbeth and 2018’s Murder Mystery) who trails in the wake of diva McFadden and her scrappy little dog Mr. Boodles.

“What I love about this play,” added director Dubrovner, “is its era – early 1940s World War II, and its pace. The 40s were such a glamorous time when it comes to style – especially women’s clothing. And comic timing is essential to accomplish the heightened humor crucial to the show’s success. This cast has the skills to pull it off, with my help, of course! Ba-da-boom!”

SUITE SURRENDER  has it all – mistaken identities, overblown egos, double entendres, and a lap dog round out this hilarious riot of a love note to the classic farces of the 30s and 40s. Please join Mammoth Lakes Repertory Theatre this February on Thursdays through Saturdays at 7:00 pm and Sundays at 4:00 pm beginning February 7th, running for three weekends through February 24th.

“ …a laugh-fest from beginning to end.” – DC Metro

The Mammoth Lakes Foundation offers both free education (books and tuition) to any Mono County resident and/or high school graduate who pursues an AA degree at Cerro Coso Community College and year-round theatre programming through Mammoth Lakes Repertory Theatre. For more information or to make a tax-deductible donation to the theatre or to the Foundation, please contact Shira Dubrovner at 760.934.6592, the Foundation office at 760.934.3781 or visitMammothLakesFoundation.org. Our nonprofit work is only possible through your generosity.

We work to provide daily news to all of the Eastern Sierra, in the tradition of Eastern Sierra News Service and the Sierra Wave. We bring you daily happenings, local politics, crime, government dealings and fun stuff. Please contact us.
View all posts by News Staff →
Rose Bracken wins Inyo County Spelling Bee
V-22 Ospreys return to Bishop Airport