By News Staff on March 19, 2014 in Government Agencies/Utilities 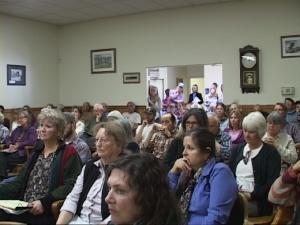 More than 80 people, with some estimates of 100, crowded into the Inyo Supervisors boardroom Tuesday with spill-over into the hallway. The passionate views expressed matched the force of the over-sized crowd. The question now – will the planning bureaucracy make way for strong public views to the contrary. The Planning Department’s General Plan Amendment lays out 14 huge areas for potential solar development. More than 40 speakers made it clear they do not want that kind of invitation for industrial solar development in Inyo County.

The Inyo Supervisors said very little Tuesday. They heard the Planning Department lay out what they had done with State support and a grant toward solar development plans. Renewable Energy is the watchword from the State and Federal governments, but down at the local grass roots a part of the public wants to hold up a stop sign.

One by one, speakers stood up to respectfully and thoughtfully share their views on large-scale solar in Inyo County. All but one person asked the Supervisors not to support the General Plan Amendment. Speakers said the industrial plants would spoil the beautiful and wide desert views of the Valley.

Susan Hudson of Independence asked the Board not to approve the amendment. She said she was “beyond saddened.” Bryan Kostors said he believes the County should have a solar plan but a better one than proposed. Kostors started the website, deepestvalley.com, to rally those disturbed by the County plans. He said the online petition against the solar plan plus paper copies from the last three weeks added up to over 1,000 signatures in opposition. Jane McDonald later delivered the petitions in hard copy form to the Board. She said a good cross-section of people had signed, including some “old and familiar names.”

Kostors told the Board that while the planning staff did not intend for their ideas to “invite solar development, it doesn’t mean this won’t happen,” he said. Kostors said, “Our landscapes are too important. We can develop energy and protect our County.”

Julie Fought  pointed to the importance of tourism. She said the LA aqueduct hurt us once. Said Fought, “Let’s not makes the same mistake twice.” Ilene

Mandelbaum of Lee Vining, long active in environmental issues, said what Inyo does has important ramifications for Mono County. The Eastern Sierra corridor, she said, is “an essential linkage for our tourists.” Mandelbaum quoted the Mono Economic Development strategy that found 86% of visitors stop to see scenic views. She warned Inyo that “You could turn abruptly in the wrong direction.”

James Wilson of Bishop, also a long-time environmental activist, said, “People come here because it doesn’t look like where they came from.” He said we need to keep Inyo “as wild as we can.” Many others said rooftop solar in Los Angeles could go a long way to meeting renewable energy needs. Still others pointed to technical problems with the County’s General Plan Amendment.

Gann Matsuda of the Manzanar Committee repeated the objections to the County’s proposed energy development area opposite Manzanar. Colin Smith, the Manzanar Park Service Superintendent told the Supervisors their plan needs to be looked at closely. Others called the industrial solar “too high of a price to pay”

and said, “beauty does matter.” A man from Los Angeles said he was “Mystified as to why you seem so anxious to sacrifice your fabulous vista to solar.”  Ben Holgate said that very little of the thousands of acres in the General Plan Amendment “are appropriate for large scale development.”  He advocated a local agency getting in the solar business.

The Wilderness Society and Sierra Club did not support the County’s plan. The powerful Center for Biological Diversity cautioned the County to look for a “less intensive alternative.”  Famous mountain man, Andy Selters, said, “The Owens Valley is not disposable.” 42 people spoke, with all but one against the County’s plan.  Jim Stroh said that he supports the Planning Department’s General Plan Amendment on solar.  He said having a plan is better than no plan at all.  He said the plan gives the County “minimum leverage” and that “people will seek out our resources.” The Supervisors indicated they had been moved by the speakers to look for a better solution. The question still remains – can they step outside of the bureaucratic juggernaut of planning to find a way toward solar that the Inyo public can embrace.

We work to provide daily news to all of the Eastern Sierra, in the tradition of Eastern Sierra News Service and the Sierra Wave. We bring you daily happenings, local politics, crime, government dealings and fun stuff. Please contact us.
View all posts by News Staff →
It’s magic: ‘Smoke and Mirrors’ in Mammoth this weekend
Bishop City Council workshop and special meeting
7 Comments
Newest
Oldest Most Voted
Inline Feedbacks
View all comments

The large, respectful and resolute crowd at Tuesdays Inyo Board meeting was quite impressive. The faces of the Supervisors reflected the seriousness and sincerity of the opposition to elements of the General Plan update; their expression seem to say…maybe we need to make a few changes. The “solar development maps”… Read more »

I counted over 100 folks at the meeting to oppose the draft REGPA. That’s the approximate equivalent of 21,000 Los Angelenos showing up to a City Council meeting in LA. Good work Inyo County!

Thanks, Gann. Sorry about that.
Benett Kessler

I enjoy hearing the report regarding what the solar opponents said, but I do wonder what the one person said who supported the solar designation had to say about it as well.

Good Point. Jim Stroh said that he supports the Planning Department’s General Plan Amendment on solar. He said having a plan is better than no plan at all. He said the plan gives the County “minimum leverage” and that “people will seek out our resources.”