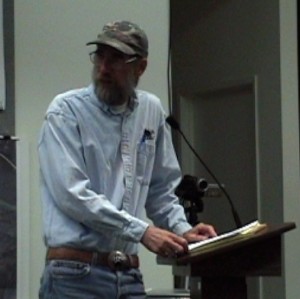 “Everyone is well aware of what went on with the bears because of the large amount of media coverage they received,” Searles said. “All of the other animals in our area such as the deer and the mountain beavers are doing great and it’s a healthy situation.”

Searles felt that he could now confirm that Blondie and Sow 2 were the most active problems during the season.

“The problems stopped immediately when they died,” Searles stated.

Mayor Neil McCarroll took issue with Searles’ suggestion that Blondie had been killed, as this was never officially confirmed.

“In my mind Blondie was destroyed and several other bears probably were too,” Searles said, “but this is something we should discuss at the subcommittee level.”

Searles warned the public that not all of the bears have gone to sleep yet for the winter, so vigilance with food sources still needed to be maintained.

“Five or six bears are working in the early morning hours and a car was recently broken into,” Searles explained. He added that when more snow falls the bears would head into hibernation.

As usual, Searles also commended the public for their good work at keeping trash and food sources to a bare minimum.

“There was a lot of extra work this year that wasn’t good, but now no more debate is needed,” Searles added. “We can continue with the parts of the program that have worked historically and learn from our mistakes.”

The show that Searles began taping with Animal Planet over a year ago is expected to air on Jan. 7, 2010 and will be titled “Bear Whisperer.”