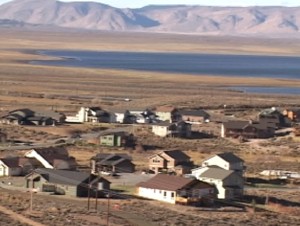 Verizon said they were taking service orders in Crowley, but residents say they are not.

Last week, Verizon officials told Sierra Wave Media that high speed internet service in Crowley Lake, scheduled for March, was now available. However, residents in the Crowley community reported to us that they can not get service.

Verizon first drew the attention of the Public Utilities Commission when they erected overhead fiber optic lines without permission in the Highway 395 scenic corridor. The PUC punished them by requiring that Verizon install high speed internet service in Crowley and Swall Meadows. PUC gained a grant to do that work. Their deadline was the end of January.

Verizon asked for more time, but the PUC denied that request and threatened to penalize the utility. Verizon officials at first said they had “backhaul upgrade problems” which lead to the delays.

Last week, Jarryd Gonzales of Verizon said that the company was “currently accepting orders for internet service in Crowley and will take orders for Swall as early as next week.”

However, several residents emailed us to say they can not get service. We re-contacted Gonzales of Verizon. Gonzales replied with this: “As a result of reports that some residents are unable to order internet service, we have taken steps to look into the matter.”

Verizon broke the law by violating the scenic highway act and should be fined. PERIOD!
It is obvious they lie and stall hoping to drop their landline business in favor of the more profitable cell business.

I’ve been at Crowley every last Saturday in April for the last 31 years and have had excellent reception there ever since I’ve had a cell phone. I guess the lake and the town are 2 different things, huh ?

O’Brien–What you have now is cell phone reception in Crowley.
What we are waiting for is DSL broadband internet (landline) service, which Verizon has promised but not delivered.

Verizon SUCKS! My mother had verizon fios installed on a special promotional offer & when the bill came…NO SPECIAL OFFER !( Double) what they quoted. Told them to come & get their equipment & and my mom lost the phone # that she had for 46 years.

If you did not move to a different area- the phone number belongs to you, not any phone company.

NOT according to AT&T. We’re talking about a land line here.

Big Rick….Gotta ask you this question….If you are in Crowley Lake the last Saturday in April for the last 31 years,my bet is it’s because of opening day of trout season…..Why on earth would you need,have or want a cell phone to be getting phone calls,or be making them,on opening… Read more »

Wayne…I just LOVE to rub it in to everybody back home how well the fish are biting.

….and for those heading north for the opener next week,if you can’t wait for another week,Lone Pine Creek is yielding lots of big trout right now….caught my 5 limit on Thursday morning in about an hour…and good weight..but be sure to have a license,cause they are checking on everyone.

I do believe that the California Fish and (WILDLIFE) bring down almost every warden in the state for the big party, but the thing that doesn’t make sense is that your license doesn’t have to be visible anymore, so the wardens will have to make direct contact with anyone they… Read more »

I’m just glad none of you gave away my favorite fishing hole. Send them all to Crowely as far as I’m concerned.

My best friend is a Warden here in So. Cal, saw him last year for the opener while I was on the Upper Owens, He said rather than the normal 20 Wardens brought from around the state, last year there were only 8.. This year will be my 43 straight… Read more »

Big Rick….Even back in the days when they said you were “required” to display your license so it could be seen from a distance,I still kept it in my wallet.I lost a licence attached to my hat one year,and it screwed up a whole day of fishing getting a duplicate.As… Read more »

Verizon has “taken steps to look into the matter.” Great.
Bottom line for the neighborhood, still waiting after all these years.