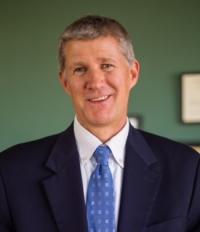 Stephen M. Place of Bishop has been appointed to fill the judicial vacancy created by the retirement of Judge Dean T. Stout.

“I have been lucky in my years as an attorney to have practiced in Judge Dean Stout’s courtroom, and I hope to carry on his example of outstanding leadership and humanity – I will miss him greatly,” stated Place.

Place has been a sole practitioner since 2013. He was a partner at Hardy and Place from 2006 to 2013 and at Place and Christensen from 2004 to 2006. Place was a sole practitioner from 2002 to 2004 and an associate at the Law Office of Peter E. Tracy from 1996 to 2001. He earned a Juris Doctor degree from the University of Montana School of Law and a Bachelor of Arts degree from St. Olaf College.

“I feel honored to have received the support I did from the community. It has been a blessing to live in this community since 1996, and I look forward to this opportunity to serve as judge. I am excited to join Judge Brian Lamb, and to work with Pam Foster and all court staff, to make the Inyo County Superior Court the best it can be,” Place commented on his appointment.

Buzz,in case you haven’t noticed,LOTS of people have TRDS…..but it makes for a lot of laughs and great late night comedy…..at the expense of making America the laughing-stock of the World….

Future Governor Newsom has a lot more programs planned and compassion for the homeless than the (another ) trump-puppet Cox would have for them…trump and his worshipers,if they had or got their way,the answer would be to ship them back to the Countries their ancestors came from…and continue to gut… Read more »

Lol! Did I mention Trump in my last 2 comments?
Didn’t think so..

Davey, you have it!

So Fuzz, again, what is YOUR solution to the homeless problem? I saw two separate homeless guys along the canal in Bishop early this morning. What should be done with them? You’re sure good at criticizing people but beyond that, you’re pretty worthless. Sad!

Went to San Francisco last week and thought all the tents and smell of urine from the staggering numbers of the Homeless, really enhanced the beauty of the city..

Ya right, Fuzz. What’s your solution to the homeless problem? Please tell!

Buzz….you and the trump worshipers think Governor Brown was bad,wait a few months and see what future Governor Newsome is going to be like for you…..or do you think trump’s endorsement of Repub Cox will get him elected ?…..lol….

First time them words have been uttered

Inyo County is very fortunate to have someone of Steve’s caliber – as an attorney and person – as one of its Superior Court Judges.