By News Staff on June 1, 2012 in Government Agencies/Utilities 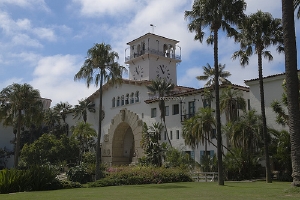 In a brief hearing underscored by statements from the victim’s parents, Joe Walker of Mammoth Lakes was sentenced to five years in prison and the requirement to register as a sex offender for life.

Walker faced 21 counts of sex-related offenses involving a Santa Barbara girl who was 14 and 15 during the crimes. Walker entered guilty pleas to five counts including unlawful contact with a child with the intent to commit a sex crime, two counts of lewd acts upon a child of 15, oral copulation and conspiracy to commit a crime.  Court documents described instances over two years in which Walker engaged in sexual intercourse with the teenager and encouraged his friend, Dr. Andrew Bourne to do the same. Bourne also faced charges in this case, and he took his own life at the end of January.

Santa Barbara Deputy District Attorney Mary Barron said that after a brief sentencing hearing, Walker was remanded into custody of the Santa Barbara County Sheriff for transportation to the Department of Corrections.  She said he was sentenced pursuant to the plea bargain.

Barron also said that she read statements from the victim’s mother and father at the hearing.  The court has withheld names of the victim and parents.  The mother’s two-page statement to Walker said, “You are a user and abuser.  Your narcissistic indulgence in yourself, without giving a second thought to the remorse you bring to others around you, is perverted and cruel.  My daughter begged you to stop.  To go away.  To leave her alone.  She told you that no one should have to endure what you did to her.  You didn’t stop,” read the mother’s statement.

The father’s brief statement said in part, “You took something that was not yours to take.  Something you can never give back.  You have brought pain, shame, heartache, and embarrassment to my family.  You deceived us.”  His statement ended by saying, “You have violated my family and we will never forgive you.”

The civil suit filed by the family against Walker and the estate of Bourne is still pending in Santa Barbara Court. 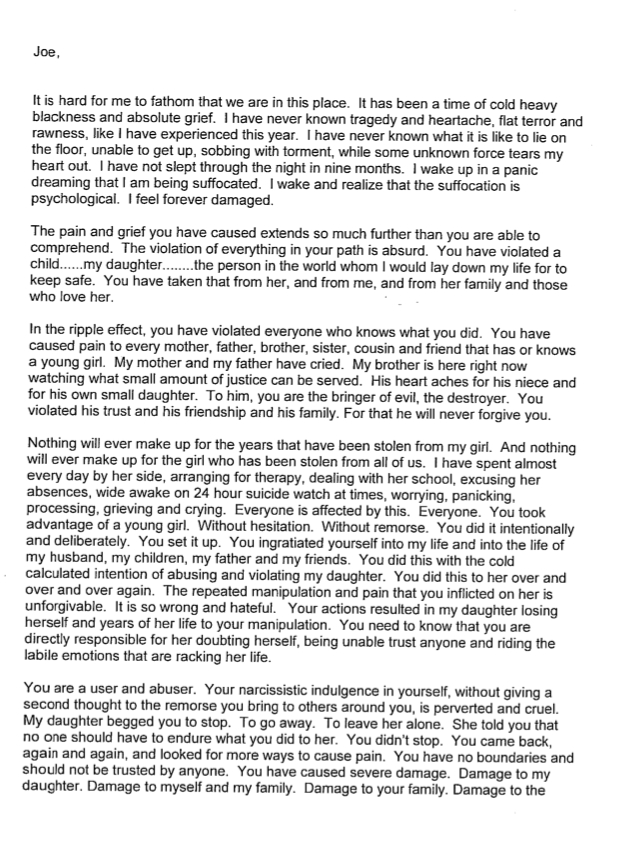 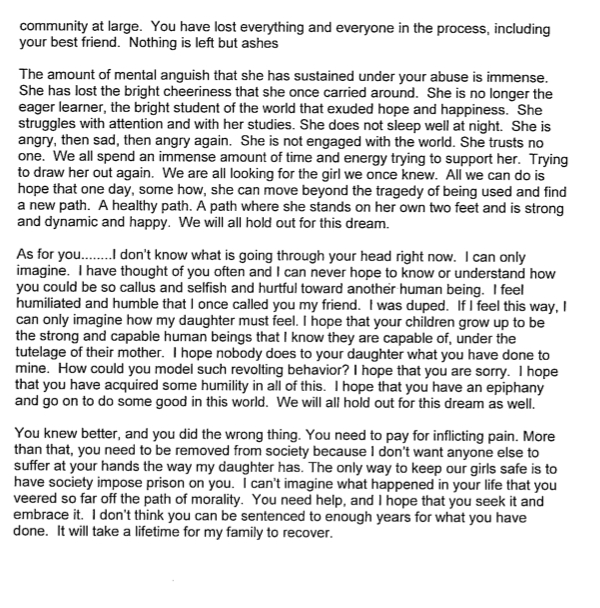 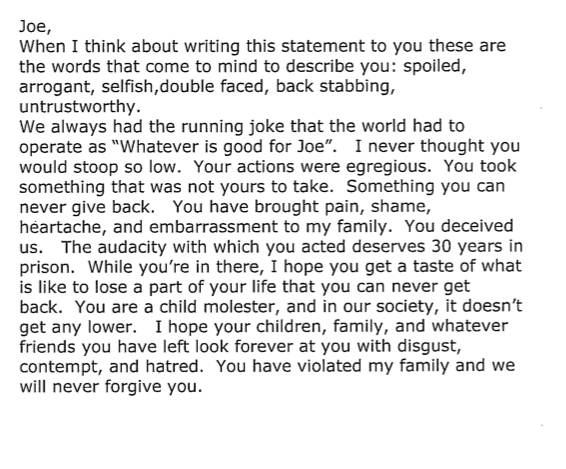 A lot of us reading this have known girls that have been violated. They are damaged for life in almost every facet of their existence. Walker will likely get his in prison. He and Dr. Bourne can hang out together in a subterranean local with very warm weather. To those… Read more »

Maybe Joe can get a job with the TSA.

Trouble
Reply to  Jenny B

That’s nice that the girl’s mom is “now spending almost everyday at her side”. Maybe if she would have spent a little time at her side instead of letting her hang out with a couple of old guys none of this would have happened, at least to her daughter. I… Read more »

I am sending best wishes to this family and especially to the victim. I, especially, wish for a return of peaceful days and nights, resolution of grief, and the strength to see each other through the ramifications of this horrific crime. Justice is hard. You don’t know what is enough… Read more »

Wow, after reading that letter from the parents I feel even stronger that 5 yrs isn’t nearly enough, not even close. I should have grabbed Joe’s front brake as I rode past him a few weeks ago while on a bike ride. Luckily in prison he WILL be a marked… Read more »

Mother nature .. I think what Benett is saying that comments were not posted because there were posts, not only yours that were out of hand. The same thing happened with myself and a couple other posters in a heated exchange with another poster here. A couple posters got out… Read more »

Hi Bennett, Are you saying my post went beyond the” limit of decency and productive communication and made assumptions that evidence had not yet proved”? Or are you saying you did not recall my post because you batch erased it without reading it being overwhelmed at the time? A Gazelle… Read more »

I really don’t know. I have posted your comments. End of story.
Benett Kessler

MotherNature – your post was fine. No reason for it to have been sensored.

Blame it on an election year

Walker deserves to rot the words spoken by his attorney show a man whose only remorse is he got caught, after what he did to this girl and leading Dr Bourne into.. SB News Press had this section in their article ….”His attorney, Samuel Eaton, said following the readings that… Read more »

Marcus…..Agree that Walker should pay dearly for what he did…but let’s not try to take some,or any of the blame off Dr.Bourn for HIS PART in this fiasco.Dr.Bourn was a grown man,and his own fault,no one elses,for his involvement with a 13 or 14 year old girl…A grown,apparently responsible man… Read more »

Hey Bennett, You got this letter from Me in March and refused to share it. Don’t you think it’s time to post it now, verbatim? “Sexual abuse is a family disease. If they got caught in their late 40’s, probability suggests that this is not the first time. Other abused… Read more »

I do not recall your post, but I do recall that comments on the original Bourne/ Walker story and those that followed went beyond the limit of decency and productive communication and made assumptions that evidence had not yet proved. The situation is very different now. Benett Kessler

Rot in jail Joe, and please never ever come back to Mammoth.

Maybe Walker will find someone more his age in prison.

LOL Trouble .. yeah but now what he wants. Sad though what a waste of it all, for everyone involved. So now hopefully some closure to it.