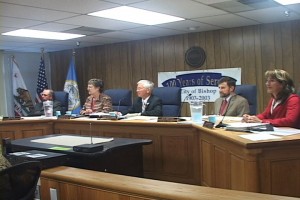 A mostly quiet and non-controversial town, the City of Bishop will give citizens what they call the “State of the City” report at their first regular meeting in October.

Individual issues have revealed that Bishop is watching its pennies. A late August meeting saw City Administrator Keith Caldwell defend Police Chief Chris Carter’s examination of a change in the route for the Christmas Parade to save police overtime dollars. Caldwell said all City departments are constantly in search of ways to deliver services that people want for less money. Officials have said that the State of the City will reveal brief Department Head reports on their accomplishments over the last four years.

The issue of this planned report came up in discussion when the City Council met in a retreat in mid-August. At that same meeting, officials discussed the 2012 Grand Jury Report which recommended improvements in the Police Department building and a potentially larger facility.

The Jury called for adjustment of the current facility to provide separated interview spaces for suspects, victims and witnesses. Council members determined that it would be more feasible to modify the current building than to build or remodel another structure. Officials said that the Police Chief would keep up his research on modification cost estimates and potential architectural services.

The minutes of the Council Retreat also said that the majority of Council members want to keep their health care cost share at the current rates of zero dollars for singles and $40 for a family rate. This – based on the fact that the Council has received no recent salary increases.