By News Staff on March 29, 2014 in Government Agencies/Utilities 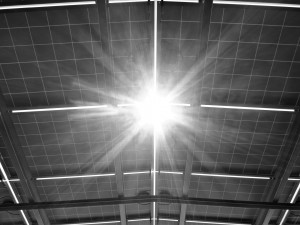 There has recently been unprecedented and overwhelming public opposition to Inyo County’s proposed renewable energy development areas (REDAs) and associated renewable energy general plan amendments (REGPAs). Instead of facilitating distributed solar power generation to benefit residents, it facilitates exploitation of the county by large utilities. County leaders are now circling the wagons and defending the proposals in three ways:

1) Name-calling: Critics of the proposal are dismissed as NIMBYs (Not In My Back Yard). That insult is a compliment. If we don’t protect Inyo County — our backyard — who will? Certainly not County leaders! If county government were doing its job, residents wouldn’t need to be NIMBYs.

2) Deceit: County leaders claim they’re protecting the county from worse industrialization, which would occur if no renewable energy plan were created. Were county officials seriously interested in protection, they would have circumscribed REDAs only around the very few, small areas which have few resource conflicts. Instead, the Planning Department ignored its own rules and circumscribed enormous REDAs which would open some of the most spectacular lands in the county to industrialization. Furthermore, Policy LU-1.17 (Utility-Scale Solar and Wind Renewable Energy Development) of the proposed REGPAs requires “Potential social, economic, visual and environmental impacts from solar or wind renewable energy facilities must be avoided or minimized to the extent feasible.” [boldface added] The “or” gives developers a choice — all they must do is claim it’s infeasible to minimize impacts and they’re granted carte blanche (with regard to zoning laws) to create all the impacts they want. This “avoid or minimize” language occurs repeatedly in the REGPAs and is not intended to protect the county from anything. To the contrary, it invites environmental devastation and is far weaker than the weak language in the Inyo-LA Water Agreement.

3) Playing the victim: County officials claim to be caught between indignant NIMBYs and implacable demands of state government. The implacable demands of state government, however, are not at all what county leaders would have us believe. The intent of the Desert Renewable Energy Conservation Plan, (which gave rise to the proposed REDAs and REGPAs), is “to advance state and federal conservation goals in these desert regions while also facilitating the timely permitting of renewable energy projects….”[italics added]. The state’s idea is to identify areas where there are few resource conflicts and permitting can be streamlined. Inyo has stood this goal on its head, and, instead, identified huge areas filled with resource conflicts and would require no meaningful mitigation in those areas. Had Inyo accomplished the legislature’s intent there would be a few small REDAs and no indignant NIMBYs.

On April Fools’ Day Supervisors will “give direction” to staff. Please ask your supervisor to direct staff to start again and play by the rules, rather proceeding with a programmatic EIR based on existing, fatally flawed REDAs and REGPAs.

We work to provide daily news to all of the Eastern Sierra, in the tradition of Eastern Sierra News Service and the Sierra Wave. We bring you daily happenings, local politics, crime, government dealings and fun stuff. Please contact us.
View all posts by News Staff →
MCSO, MLPD: DUI arrest
Help find a missing service dog
10 Comments
Newest
Oldest Most Voted
Inline Feedbacks
View all comments

The LADWP has an energy portfolio that includes natural gas as a helpful means to disconnect from coal. The City of Los Angeles just passed a NIMBY policy: no fracking within the city limits due to potential environmental concerns. So, get if from someone else’s back yard. This is what… Read more »

This whole topic bites. Either way DWP gets to raise our rates? Their telling us to pick our poison. We deserve lower rates if they want us to support their b.s.. I kind of like the Valley the way it is.

The Owens Valley should be protected not industrialized. =

“Eastern Sierra Local’s” identity as a real Eastern Sierra may be fake. That comment is a gross oversimplification of the realities of this situation, and it behooves one to educate oneself more thoroughly on the matter before posting out-of-context comments.

Can’t you see the difference between the beautiful lands of Inyo and the rooftops of Los Angeles? I guess your Prius needs a “Pave it to Save it” bumper sticker. And, this isn’t about anyone’s backyard. This is about saving the Basin and Range Province and Mojave Desert from massive… Read more »

The basin/ range as well as the Mojave are HUGE and a tiny solar farm in the vast expanse of the western desert isn’t go to hurt anyone other than a few locals who are exhibiting text book examples of NIMBY-ism. I support the freedom from foreign oil, sustainable jobs… Read more »

Dear Eastern Sierra Local, Calling someone a name made into a clever acronym is not a valid discussion point. Can you say the same thing for the locals of San Luis Obispo county who just got news of dramatically higher cancer rates due to the presence of Diablo Canyon Nuclear… Read more »

ESL, Your comments and ideas are grist for the mill . Thank You. Most folks in the Community who I know and who are similarily disinclined to the idea Industrial Scale Development, well for them and myself it has to do with scale, location and sustainability. The overall effects of… Read more »

It is precisely why the 1979 Solar Bill of Rights passed by our state legislature made it basically impossible for county or local governments to prohibit solar power installations. Read the wording of that act and understand it’s implications for our desert. The development of a solar power infrastructure is… Read more »

Obama and his “Change” policies want renewable energy; so does Jerry Brown and the majority Democrat run State Legislature; AND SO DO I!! It’s a shame that NIMBY-ism is playing such a huge part in this debate. Renewable energy is awesome and gets this nation away from foreign oil and… Read more »