By News Staff on February 9, 2016 in Government Agencies/Utilities

With a little wordsmithing, the Los Angeles Department of Water and Power’s request for an okay on the development of a plan to reduce water allocations for irrigation and mitigation projects in the event of a fifth consecutive year of drought came before Monday’s Standing Committee meeting in Independence. 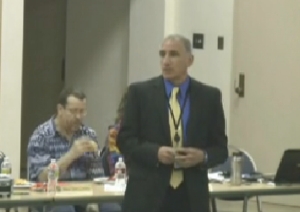 The re-wording made it clear the Standing Committee was making the final decision on a reduction plan, based on evaluations and recommendations from the Technical Group.

LADWP wanted a vote, as it did at last Tuesday’s Inyo County Board of Supervisors’ meeting. Only problem, the agenda item was not listed as an action item. Technically, no vote could be taken, though attorneys on each side of the table disagreed on the legality of a vote.

And so it went for nearly three hours.

Inyo Water Department Director Bob Harrington made the same argument he made last week before the Supervisors: everyone wants to be pro-active to avoid the drama of last spring, but it’s premature to talk about water reductions.

But, Supervisor Matt Kingsley couldn’t figure out what the resolution did that the Committee couldn’t do without it. Another sticking point was the fact there was no “plan” to approve. In essence, LADWP wanted approval to being developing a plan, but Inyo County appeared to prefer to negotiate the terms of that plan within the context of a Standing Committee meeting.

Eric Tillemans provided updated snow pack and precipitation numbers that included the late January snow storm. The snow pillow numbers average out to 97-percent of normal. “If there is no more precipitation through the rest of the rainy season,” Tillemans said, “we’ll end up at 63-percent of normal.” As sad as that prospect was, it was a huge improvement over last year and a significant improvement over the first three years of drought.

LADWP will do another snow survey at the end of this month, and the final survey in mid-April.

Standing Committee protocol allows each side of the table to cancel out the other; if both the City and County don’t agree, any motion dies. The fact the requested motion was not listed as an action item and no vote taken was probably moot. Instead, the Committee will meet February 29 at 11 a.m. in Los Angeles, with the proceedings televised in Bishop.

Rancher and LADWP lease holder Scott Kemp and Harrington put the two-hour discussion in perspective. “Our draft lease indicates water will be provided. This is in the lease. DWP is obligated to supply water if it can,” Kemp said. Harrington added, “it doesn’t matter what happens here, our job is the same.”

Since the only action item on the agenda was approval of actions taken at the November 2 meeting, there was little discussion of Inyo County’s request for some of the water savings on Owens Lake to stay in the valley.

Harrington had sent a letter listing some of those uses, most simply returning water allocations to historical amounts, but the City representative and LADWP staff had not had enough time to look at the January 22 information. “We don’t agree that this is within the purview of the Agreement,” said Yannotta. “But staff can look at (the letter).”

County Mitigation Manager Larry Freilich presented information on the Department’s grant application to the Natural Resources Agency for the planning and environmental document phase of a river trail project on 6.5 miles of the Lower Owens River. The Agency is planning site visits in March and Freilich said the letter from LADWP that accompanied the application “falls short of what is needed. What we need,” he said, “is a land tenure/maintenance agreement.”

Adams said the Department would “figure out how to support.” Yannotta was more cautious, referring to the California Environmental Quality Act documents on the Lower Owens River Project.

Freilich also discussed the approval of a $280,000 feasibility study grant through the Inyo Mono Integrated Regional Water Management Program for a water recycling project in Big Pine. The water could be used on a revegetation mitigation project east of the Big Pine Paiute Tribe of the Owens Valley reservation.

The meeting bright spot was left until the end of the meeting – a report by Susan Carpenter on the vegetation monitoring protocol. The development of the protocol by a neutral third party, the Ecological Society of America, was part of the resolution on Black Rock 94. According to Carpenter, the draft report will be available February 21 and the County and City should begin joint monitoring this summer. In addition the Green Book (basically, the users’ guide to the Long Term Water Agreement) update should be finished by spring.