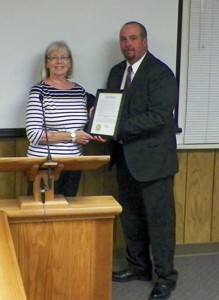 At the request of the Wild Iris Family Counseling and Crisis Center, the Bishop City Council proclaimed October as “Domestic Violence Awareness Month” at its last regular meeting held on Monday, September 22. On hand to receive the proclamation from Mayor Ellis was Wild Iris Executive Director, Lisa Reel.

In California, domestic violence is defined as abuse or threats of abuse when the person being abused and the abuser are or have been in an intimate relationship (married or domestic partners, are dating or used to date, live or lived together, or have a child together). It is also when the abused person and the abusive person are closely related by blood or by marriage.

Inyo County ranked No. 2 in state for Domestic Violence Calls for Assistance

Domestic violence is serious problem in Inyo County, with the county having the second highest ranking in the state for Domestic Violence Calls for Assistance (DVCA). Coming in at 18.1 per population of 1,000, the number might seem low compared to number one on the list– Del Norte County–which has an astounding 53 per population of 1,000 (more than 8 time the state rate). While two-thirds lower than Del Norte County, Inyo County’s rate is still almost three times larger than the DVCA average for the state at 6.2 per 1,000. Mono County’s rate is slightly higher than the average at 7.3 per 1,000.

According to Inyo County Sheriff Bill Lutze, “Based on our experience responding to domestic violence calls, we often find that financial problems and use of alcohol are the culprits for much of the domestic violence in our county. Substance abuse (other than alcohol) does not appear to be a main contributor to domestic violence abuse,” says Lutze, “but alcohol especially seems to bring out the worst in people under its influence.

“Poor parenting and coping skills also are factors that seem to perpetuate the cycle of domestic abuse found in the county,” Lutze noted. ”Sadly,” he went on to say, “We have seen three generations of a family all serving time at the county jail at the same time: Grandfather, father, and son. It’s not the kind of family reunion we like to see.”

Susi Bains, the Program Director for Wild Iris, says that “It is not alcohol or substance abuse that is the root cause of domestic violence.” Noting that, while alcohol and drugs do lower inhibitions and the threshold for abuse, Bains made it clear that there is already an innate predilection towards violence inside the person that commits abuse from which the violence erupts, whether or not he or she is under the influence of alcohol or other substance. “It is a part of who that person is,” says Bains.

Reached after the city council meeting, Wild Iris Executive Director Lisa Reel said, “Domestic Violence is a community safety problem which will not be resolved by a small segment of the population. We (Wild Iris) alone cannot solve the issue of domestic violence in Inyo and Mono Counties; it will take communities committed to non-tolerance of domestic violence.”

Reel went on to explain that local government bodies can strengthen the work of domestic violence centers by:

• Recognition that there is a problem in the local communities;

• Resources so law enforcement can respond to dv calls in a timely manner;

Wild Iris is a family counseling and crisis center for Inyo and Mono Counties, started in 1981. It has 15 staff members with offices in Bishop, Lone Pine, Bridgeport and Mammoth Lakes serving victims of domestic violence, sexual assault, and child abuse. It also offers programs in parenting and co-parenting classes, supervised visitation monitors, and court-appointed special advocates.

Domestic violence affects many besides just women and children

Explaining a common misconception, Reel says that “Domestic violence is not just a women and children issue, but is rather a non-gender specific issue between heterosexual and same-sex partners;  encompasses all ages, from middle school aged children to senior citizens; all social-economic statuses, from penniless and homeless to very wealthy, and all ethnicities.”

“We need to keep the conversations going and that, regardless of status, no one is above the law when it comes to being morally responsible; nor does anyone have the right to take away someone else’s right to live in an environment free of violence,” says Reel.

Wild Iris by the numbers and services

We encourage anyone who is interested in understanding more about domestic violence to attend. We will also be at the Board of Supervisors meeting next week, asking them to proclaim October as Domestic Violence Awareness Month. As an agency, this is important to us for several reasons, one, it heightens the awareness of local government and the public in general about the problem that exists in our communities, it spotlights the work that Wild Iris is doing and it is a call to action for everyone to get involved to help bring an end to domestic violence.

Domestic violence and abuse is clearly a problem in the Eastern Sierra, especially in Inyo County based on the numbers, although any violence or abuse at any level should never be tolerated.  Whether as a victim of abuse or to find out what you can do to help, you can visit the Wild Iris website at www.wild-iris.org, or call them toll-free at (877) 873-7384.

Charles James
Reply to  Susi B.

Susi, Thank you for the clarification on the numbers. I thought that 248 number receiving services seemed low by comparison to FY 2012-2013 numbers. You are right absolutely spot-on when you say there are incredible people doing amazing work in the community. People that suffer from domestic violence need a… Read more »

Congratulations to wild iris for a job well done and recognition much deserved. That mayor sure is good at handing out awards. Maybe in the future he and his fellow members will do something to deserve an award for themselves; anything, please. Ha hopes are hi.