By News Staff on June 14, 2014 in Government Agencies/Utilities 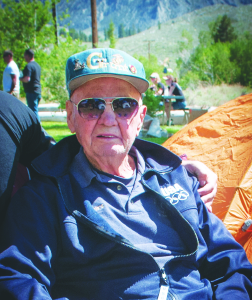 Disabled Sports Eastern Sierra’s Eighth Annual Wounded Warrior summer camp, known as Operation High Altitude, was filled with excitement and exhilaration. This year’s camp was held June 2-6, and was full of great weather, adventures and therapeutic, healthy fun for all.

This year’s camp included 27 Wounded Warriors and their guests or families, and 11 VIPs from various branches of the service, including Major General Larry Nicholson and special guest Sergeant Major “Iron Mike” Mervosh, USMC retired. Mervosh, age 90, is a decorated combat veteran of WWII, Korea and Vietnam. “I wanted to re-enlist for Desert Storm, but they wouldn’t let me,” he quipped.

The group set up camp at the McGee Creek RV Park and Campground on Monday, after which they were treated to a welcome dinner, hosted by the Mammoth Lakes Fire Department. It has become a gracious tradition for the MLFD to host the Warriors on their first night, both during winter and summer camps.

Tasty breakfasts, courtesy of Sue Ebersold from The Breakfast Club, got the campers’ days off to a roaring start. With calm water on Convict Lake, the group spent Tuesday morning on the lake kayaking, thanks to Mammoth Kayaks, and trying out DSES’s new OnIt Ability adaptive SUP (Stand Up Paddleboard), which was purchased via a grant from the Christopher and Dana Reeve Foundation. The new wheelchair accessible paddleboard wowed Warrior Sarah Bettencourt, whose neurological injuries keep her largely in a wheelchair. “It was awesome,” she declared. “What a great experience!”

Wednesday, the vets headed out on the waters of Crowley Lake for fly-fishing demos from many generous local 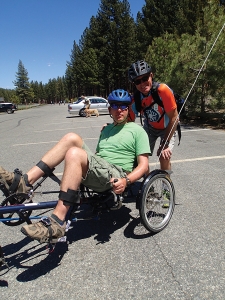 guides, who were brought in by local fishing guide and DSES staff member Mark Spieler. Warrior Bethany Wolf pulled in 10 of the 16 fish caught by her entire boat.

Later that afternoon, the group went cycling at Shady Rest Park. Several of them used mountain bikes provided by Footloose Sports. Adaptive, recumbent, hand cycles – everything went out on the ride! While the group was cruising the trails, DSES Executive Director Kathy Copeland took some of the VIPs on a bike tour of the site for the National Wounded Warrior Center, which is to be located adjacent to Cerro Coso Community College. “Now we need to get to fundraising and get it built,” Nicholson commented.

On Thursday, the group hopped aboard the ESTA bus to June Lake for a day of rock climbing. Thanks to Sierra Mountain Guides, everyone was able to experience the challenges of rock climbing. Later that night, the annual Hootenany party closed out the week on a pitch perfect note. People danced and sang along to songs and storytelling, courtesy of cowboy poet Larry Maurice and Bishop musician Derik Olson, while Angel’s Restaurant provided mouthwatering barbecue!

Warrior Benjamin Oknefski said he enjoyed the whole experience. After his experience this summer, Oknefski added he wants coming back to Mammoth for DSES’s winter Wounded Warriors camp, Operation Mountain Freedom. “I snowboard and am looking forward to that.”

The Bettencourts were similarly upbeat about the camp. “I paddle boarded, I fished, I rock climbed!” Sarah enthused. “Hello? The whole week has been so positive.”

Copeland said the summer camp has certain advantages over its winter counterpart. “The difference between this camp and the winter camp is that summer allows the campers to spend more time together. At the end of the day, they gather around the campfire, tell stories and really get to spend quality time together. They can relate to people who have shared experiences and find camaraderie, as well as healing and a sense of wellbeing.”

Amy Hatcher, Family Support Coordinator with Wounded Warrior Battalion West, agreed. “It’s a really good opportunity for folks to reconnect with themselves and have a great time with others who understood their issues, but without the pressures of having to talk about those issues,” she noted. “Everyone accepted each other without questions, and had time to be together, but also decompress. Campfire time was spent summing up each day and it was fun, and they all became one cohesive group.”

Sergeant Major Mervosh, a long time supporter of Wounded Warriors events, echoed those thoughts. “I’m pleased to be here with these fine men and women,” he said. “They’ve been through a lot and this kind of program is important for them. The camp is just terrific and they deserve it.”

Sean and Anna O’Leary stressed how much the camp has meant to them personally. “It’s done a lot for our family, brought us closer together,” Anna said. Sean went on to compliment the DSES staff and the more than 30 volunteers, who helped put on the event for making the camp experience so special.

We work to provide daily news to all of the Eastern Sierra, in the tradition of Eastern Sierra News Service and the Sierra Wave. We bring you daily happenings, local politics, crime, government dealings and fun stuff. Please contact us.
View all posts by News Staff →
Motorcyclist airlifted
Man arrested on Marine base
1 Comment
Newest
Oldest Most Voted
Inline Feedbacks
View all comments

Great job guys, sounds like a spectacular event for these heroes. Look forward to the National Wounded Warrior Center, Mammoth is the perfect place.