By News Staff on July 30, 2012 in Government Agencies/Utilities 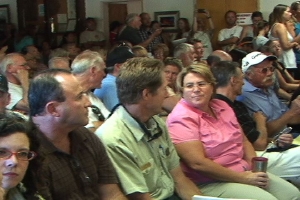 Forest official talks to Supervisor Vikki Bauer at the first June Mountain meeting. Since then, many have worked to find a way to keep the Mountain open.

The outlook to keep June Mountain open for next winter seems bleak to most citizens, but many continue to look for a way. The Mono Supervisors scheduled a special meeting for Tuesday  at which they have scheduled discussion on June Mountain.

The special meeting is scheduled for Tuesday at 10am at the June Lake Community Center. The agenda item calls for discussion regarding issues related to June Mountain closure, including but not limited to any financial or land-use options that may exist to avoid closure.

The item will be led by the Keep June Mountain Open Coalition and Mono Community Services Director Scott Burns. Burns said that the Coalition includes local residents Connie Black, Patty Heinrich, Ralph Lockhart, Supervisor Vikki Bauer and Supervisor-Elect Tim Alpers. This group has met with Rusty Gregory and the Forest Service in search of an answer to continued operation of June Mountain.

Burns said that a community meeting late last week in June Lake was well-attended. He said there was discussion with community members about the recent meeting with Rusty Gregory and a suggestion to respond to him once more pressing to keep June Mountain open. Burns said there was not a lot of support for another response to Rusty Gregory further. He said citizens may try to find a different approach.

At Tuesday’s special meeting, the Mono County Supervisors will weigh in with their ideas. Some of the past suggestions have included allowing second homeowners to rent out their spaces to increase the bed base and transient occupancy tax, use of part of the bed tax to market June Mountain and consideration of re-zoning the 88 acre Rodeo Grounds property in June Lake to help the marketability of this key piece of land.

what everyone should have been discussing was the bombshell that Tim Alpers dropped in his opening comments regarding the Cal Trout sponsored bill…….that has a much greater wisespread effect in the whole area.

Burns said they are “sincerely listening.” Classic Scott Burns the king of listeners and leader of the pack for no action. Ask Scott what his proposed solution to any issue and it will be to schedule another meeting. This guy represents the worst of government processes with not a solution… Read more »