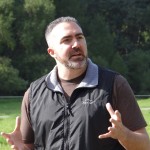 Hanna will be sharing stories about the Muir Family Foundation, issues surrounding our National Parks and how he has been inspired to carry on his great-great-grandfather’s legacy in his own work as an advocate for California’s State Parks. He will also be sharing some never-before-seen images of the John Muir family.

There will be introductory remarks by Dr. Terry McAteer, Inyo County Superintendent of Schools, who implemented the popular Community Reads Program here in the county.

Don’t miss this inspiring conversation and dialogue. Those attending the approximately 90-minute presentation will have an opportunity to ask Hanna questions about his famous grandfather.

Admission is free and there will be coffee and sweets after the discussion.

If the famous Scottish-American Naturalist, author, and preservationist, John Muir, ever had a doppelganger, he would most likely be the actor Lee Stetson, who is about as close the real John Muir as anyone can be in both looks and demeanor. 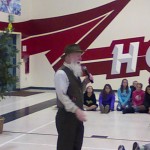 Last Friday, 450 students at the Home Street Middle School watched and listened to Stetson’s portrayal of “The Spirit of John Muir,” presented as part of the 7th Annual Community Reads Program sponsored by the Inyo County Superintendent of Schools Dr. Terry McAteer and the Inyo Council for the Arts. 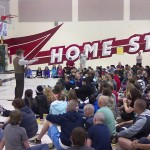 Stetson’s portrayal of John Muir has been presented in Yosemite National Park since 1983 to more than a quarter of a million visitors and he has toured throughout the country, performing at universities, parks, museums, wilderness and environmental organizations from Washington D.C. to Hawaii.

The show featured stories of Muir’s childhood and his love of reading and learning. He also discussed his adventures in the western wilderness.

Stetson said that in 1982, he was a 42-year-old actor from Los Angeles when he first visited Yosemite National Park. He was so besotted by the experience that he decided to apply for any job that he could find and spent the next seven months working as a desk clerk.

It was during that time that he researched the life of John Muir and came out with a one-man theatrical performance. Thirty-two years have since passed and he has written two more one-person shows and a fourth show based on Muir and President Theodore Roosevelt.

“The Spirit of John Muir” includes tales of his “The Perilous Night on Mount Shasta,” with Muir freezing in the midst of a howling blizzard while simultaneously being boiled and blistered in hot springs; his astonishing ride down a Yosemite Valley canyon wall on a snow avalanche; and climbing the 500’ wall of the winter ice cone beneath the Yosemite Falls.

Stetson’s performance also includes stories of Muir’s encounters with a mighty Yosemite earthquake, dangerous Alaskan ice crevasses, snow blindness, and much more – all liberally salted with Muir’s wilderness philosophy.; only a few of Muir’s amazing—and true—adventure, all liberally salted with Muir’s wilderness philosophy. These and other stories revolve around promote the theme that good health and energy are the rewards of being fully and joyfully engaged in the wildness.

Dr. Terry McAteer thanked Stetson for coming to Bishop, saying, “The life of John Muir is one of the most inspiration stories of any great American, and has left of a legacy of national parks and wilderness areas that we can all enjoy.”

I’m going but I think it’s gonna be a patchouli and body odor festival…
When did being stinky become cool?