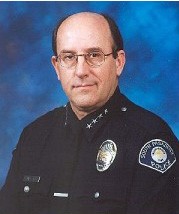 Reliable sources close to the situation have confirmed that former LAPD Officer and current South Pasadena Police Chief Dan Watson is one of the candidates under serious consideration for Mammoth’s Interim Police Chief. Sources here and out of the area indicated that Watson sits at the top of the list.

Asked if he could confirm Watson’s involvement in the Interim Chief process, Mammoth Town Manager Rob Clark said, “I can’t confirm that, and I won’t until we finish the process and have a job offer.” Clark had earlier confirmed that interviews of candidates took place last week with the panel of himself, Mike Grossblatt, Bishop Police Chief Kathleen Sheehan and Mammoth Police Officers Association President Paul Robles.

Town government-watchers have an eye on this Interim Chief process, weary of the conflicts and embarrassments over police issues – from extended investigations to the arrest of officers in a bar brawl last year. With the retirements of Chief Randy Schienle and Lt. Jim Short, the leadership of the Mammoth Police Department sits wide open.

South Pasadena Chief Watson, according to the internet, served 28 years in the Los Angeles Police Department. He was an LAPD Commander and oversaw what is described as an innovative approach to managing personnel conflicts, using alternative dispute resolution techniques, including mediation.

Watson took on the job as police chief in South Pasadena in 2002. According to some accounts Watson cleaned up the department which was known for a series of scandals in the 1990s. A former South Pasadena City Councilman said Watson created “a force everybody looks up to.”

At the end of his stint, Watson did run into some type of political snarl. News accounts say four out of five councilmen did not want to renew Watson’s contract but wouldn’t say why. Other news stories reveal an upsurge of public support for Watson with the possibility of problems with the Police Officers Union.

Mammoth Officials will conduct background checks on Interim Chief candidates and finally make an offer. When the offer is accepted, the new official’s name will go public. The Interim Chief will go to work July 1st.

We work to provide daily news to all of the Eastern Sierra, in the tradition of Eastern Sierra News Service and the Sierra Wave. We bring you daily happenings, local politics, crime, government dealings and fun stuff. Please contact us.
View all posts by News Staff →
Dave McCoy’s New Photo Blog
Inyo Tax Collector Race