First the Lion Fire, now Ferguson and others–wildfires are burning all over the West again and smoke pollution is becoming part of our lives. The purpose of this communication is to share information on smoke pollution, focusing on health concerns, understanding air quality and approaches to reducing exposure. 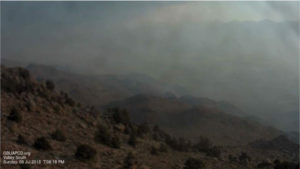 People react differently to smoke exposure-some people are more sensitive than others. Wildfire smoke contains a lot of stuff, gases and particles, depending on what is burning and how far away the fire is.

From a community health perspective, very small airborne particles (particulate pollution) are most important. Small particles are inhaled deep into the lungs where they may cause inflammation. Particle pollution also often causes local irritation of eyes and throat.

When there is smoke pollution some people will experience lung symptoms such as cough, wheezing and shortness of breath, especially people with asthma, COPD or other lung conditions. Such people may have a significant decrease in lung function and may be more susceptible to pneumonia other respiratory infections.

This kind of pollution also increases the chance of heart problems acutely, and people with existing heart disease or risk factors for it are the most likely to be affected. Some studies, but not all, have shown that smoke exposure increases death rates, again with deaths clustered among vulnerable people with lung and/or heart disease.

Children are considered vulnerable because their lungs are immature and bigger for their body size compared
to adults. Child hospital admissions reportedly increase when wildfire smoke incidents occur.
Pregnant women are also considered vulnerable based on the known risks associated with other types of particulate pollution, such as a higher chance of a low birthweight baby.

To put it in perspective, however, Mono County has not seen increases in Emergency Room visits or hospitalizations during past smoke pollution periods in our area.

Whether on-and-off smoke exposure increases our long-term risks of heart disease or cancer is unclear. Short term infrequent exposures probably do not have much effect, but long-term exposure to particulate pollution, such as urban smog, is a risk factor for getting heart disease.

In terms of cancer, we know that some firefighters have higher rates of lung cancer compared to other people, but it would probably take a great deal of exposure to wildfire smoke for non-firefighters to have an increased cancer risk.

You can tell when there is smoke in the area but the intensity, the concentration, of the smoke changes constantly with wind and weather, and that may be important information for planning activities.

GBUAPCD posts particle pollution measurements, typically in two categories of particle size (corresponding to different types of air monitors). The smallest particles, less than 2.5 microns, are reported as PM2.5, which is considered the best measurement of wildfire smoke concentration.

The concentration of particles less than 10 micrometers (PM10) is also considered a valid indicator of wildfire smoke pollution. Locally, when either PM2.5 or PM10 levels exceed 100 a Stage 1 Health Advisory is issued, a recommendation that vulnerable people avoid strenuous outdoor activity.

When particle concentrations are over 200, a Stage 2 Health Advisory is issued, recommending that everyone avoid strenuous outdoor activity and that vulnerable people stay indoors as much as possible.

The air pollution district sends out electronic messages to people, media and agencies when areas in our counties reach Health Advisory levels. Our health department strives to share communications about Stage 2 advisories with those on our Monogram distribution list, but you can sign up on the GBUAPCD website to receive alerts directly for specific parts of Mono and Inyo Counties.

Other websites, such as the federal government’s AirNow, provide current air quality information in terms of the Air Quality Index, or AQI, a nationally standardized system for pollution reporting that some people may be more familiar with. https://www.airnow.gov/index.cfm?action=airnow.local_city&mapcenter=0&cityid=659 )
It can be challenging to accurately predict changes in smoke conditions, but the U.S. Forest Service has a
useful site that provides a 72-hour forecast of wildfire smoke conditions:
https://haze.airfire.org/websky/v1/run/standard/CANSAC-2km/current/#viewer

Exercise greatly increases our body’s exposure to air pollution because there is much more air, and pollution, going in and out of our lungs. It therefore increases the risk of harmful effects.

Dust masks and surgical masks do not reduce our exposure to particulate pollution. N95 or N100 masks, technically called respirators, can greatly reduce inhalation of smoke particles if they fit properly, which means tightly. Leaky masks do not provide much protection. Properly fitting N95s are a bit hard to breathe through and may not be practical for use over many hours or days. They may also be hard for vulnerable people, such as elderly and people with lung disease, to tolerate. If you choose to try one, the state health department website has information about N95 masks:
https://www.cdph.ca.gov/Documents/Use%20of%20Particulate%20Respirators%20(Masks)%20to%20Protect
%20from%20Wildfire%20Smoke%20or%20Ash.pdf

• When smoke levels reach potentially unhealthy levels we recommend that people stay indoors as much as possible, with windows and doors closed, swamp coolers off and air conditioners on “Recirculate” (if they have that function). In hot climates that may feel like being between a rock and a hard place – balancing the possible harm from smoke against that of heat.

• Note that in a leaky, drafty building the indoor air quality will not be much different than the air outside.

• Indoor activities that generate particulate pollution such as smoking, vacuuming (unless your vacuum clearer has a HEPA filter), and certain types of cooking (broiling and frying) are not recommended when the air is already unhealthy.

• Indoor air cleaners or filters can remove smoke particles and improve home air quality. The most effective are filtering systems installed in the central ductwork of homes. There are also smaller portable cleaners that can effectively clean indoor air, if their capacity is appropriately matched to the size of the indoor area. The California Air Resources Board has valuable information about indoor air cleaners and maintains a list of approved products https://www.arb.ca.gov/research/indoor/aircleaners/consumers.htm

• Some experts recommend having a “cleaner air room” in the home, which can be shut tightly and with no particle generating activities. Such a room might be the best place for an appropriate portable air cleaner.

• Air cleaners which generate ozone are not recommended.
Vehicles Vehicles should be used for transportation, not shelter from smoke. Recent model vehicles tend to have air filters that do a decent job of removing particulate pollution if set to recirculate with doors and windows closed.

Smoke-sensitive people who are unable to sufficiently reduce their smoke exposure at home may consider leaving the area during major smoke incidents, if it is feasible and assuming there are places with better air.

However, severely smoky conditions may make travel more dangerous and benefits should be weighed against risks.

The Lions Fire started in early June and was a handful of acres. A hot shot team could have been inserted into the area and could have put a line around the fire and contained it. The powers that be thought otherwise. Today over TWO MONTHS later the Lions Fire… Read more »

Dupper….be careful saying that….whenever I do,I get accused of bashing the fireman,not the people and the big-shots at the desks making the decisions…

Here’s some information…start putting fires out again, then we don’t have to live with smoke!