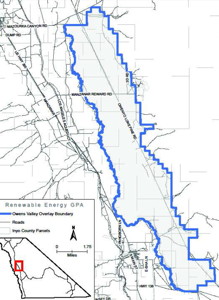 Between Independence and Lone Pine – One of fourteen Renewable Energy Development Areas proposed throughout the County.

As a petition against Inyo’s solar designation areas continues to gain signatures and public determination grows, the Inyo Supervisors agreed to delay their vote on the Planning Department’s proposal to establish 14 areas for large-scale solar or wind development.

Last month, almost half of more than 70 citizens in attendance stood up against the proposal at a Planning Commission meeting. Some grew so angry, Commissioners considered calling security. They did vote 4 to 1 to accept the proposal and send it to the Supervisors. At Tuesday’s Board meeting, Planning Director Josh Hart. who was also battered by citizens, stood up to say his Department now has a Frequently Asked Questions sheet on this hot topic. It will go on the Planning Department website at inyoplanning.org.

Hart said this information would “set the record straight.” Hart said the General Plan is the County’s “Constitution.” He said there is a renewable energy part that needs an update since Inyo “expects to see considerable demand.” He described a planning process which led to the designation of renewable energy development areas. He said the 14 areas are “less than a half of a percent of Inyo land.”

Hart said his Department did “extensive public outreach” and that the process is very preliminary and in an early phase. He then suggested that the Supervisors delay their consideration of the renewable energy proposal until April 1st and instead hold a workshop next Tuesday to explain more about the plan.

Board Chairman Rick Pucci said he has heard from citizens who do want more time. Supervisors Linda Arcularius and Matt Kingsley commended the Planning Commission and Planning Department for “doing their best.” Kingsley said attacks on planning officials are “counter productive.” More next Tuesday.

Hi Reality, Yes, you are correct there is a trailer park on family property, it is still owned and run by a relative. The trailer park has been there a good 60 years at least if not 75. The rest of the property up until the 70s was somewhat developed… Read more »

Solar farms will not make or break Inyo County. It will still be a beautiful place. I would think the majority of the people, especially the liberals here, who push green energy down our throats, would welcome this type of development. But, surprise, they don’t. Never good enough for the… Read more »

These facilities could possibly be also be used as a tourist attraction. Or an interest to tourists. Along the lines of Hoover Dam. Enhance the economy. Get rid of the fishing economy that’s such a paradox. I’m all for the solar farms. Lots of things we could do to help… Read more »

The importance of the decisions of 5 people here in Inyo County, Folks who go by the names of Rick, Jeff, Mark , Linda and Matt, Real People who serve us all, to the best of their abilties, deserve always our thanks and respect. They make themselves available, they seek,… Read more »

I have to agree with much of what Ken says. We’re not an island here in the eastern Sierra. We’re part of California and part of the west and we have a real energy problem. Hydro is greatly reduced these last 3 years thanks to the drought. In my opinion… Read more »

So if I don’t want to date someone and I say no, am I supposed to come up with a “reasonable suggestion” for that person?

Please assure me that your organization receives no support, monetary or otherwise, from the Koch brothers or any of their many organizations. They are so protective of their billions of dollars in profits from oil that the are trying to make alternative sources such as solar power illegal. Some of… Read more »

Looks like the Koch brothers are shockingly on LADWP’s side in this.

Benett, Do you know what the delayed vote date is? And Ken, a couple of engineers per site (after the construction is finished) making 64K to three figures. That’s maybe around 2.5 million for around 30 persons which is the figure most noted for permanent employees. I doubt most of… Read more »

I have to say that I find it extremely ironic and amusing that you mention trailer parks in your post. As I’m sure you are aware that is what is located on the land in your “beloved valley” that your ancestors didn’t sell to DWP. Along with a hotel, a… Read more »

Your condescending tone does not make your message particularly desirable. I will note that the locations of the proposed Renewable Energy Development Areas are, in part, highly visible. Perhaps in all of the remote acres of Inyo, there might be better locations. Many people in the Owens Valley make a… Read more »

So far, the only “answer” has been NO! Sorry if you think realism is condescending. There doesn’t seem to be any joining with people who only can say NO! Not one single realistic suggestion has been posted that is a real option to any of the suggested locations. Less than… Read more »

Realism is not condescending, but your words are. People have legitimate views and wants about the solar planning. If the public does not want visible, 1200 acre, one million solar panel arrays, why not see if there are less conspicuous locations? Do we need to designate 1,000 square miles for… Read more »

I was just looking through: ORDINANCE NO. 1158: “The County of Inyo (“County”) supports and encouragesresponsible utilization of its natural resources, including the development of its solar and wind resources” Which was adopted unanimously by the Inyo BOS. It suggests that: 21.08.080 Pilot or proof of concept powerplant A pilot… Read more »

You were doing so well there at the beginning of your comment, and then you felt the pull of ego and just had to accuse me of being inflammatory and patronized all of us with “maybe we’re finally getting the message.” Please, Ken. Others see things differently from you, and… Read more »

After all the demining, juvenile, mean spirited and personal attacks by your drones that you seem to love to print — I’m supposed to care about your clutch the pearls moment? “Your lack of respect and consideration of others is most unattractive” As are your personal attacks on me and… Read more »

I don’t wear pearls. Complaints about elected officials, if factual, can go farther than those about individuals. I try to keep people from hurting each other. It’s not an easy job, but I signed up for it!
Benett Kessler

Ken, I guess I’m being vapid and emotional, and I acknowledge zero credibility, but I have to wonder: what do you LIKE about the east side?

Vickie, Ken, and anyone else, I hear you loud and clear. Just asking, did anyone ask me or anyone else if it was ok to turn large areas of California desert land into water sucking peoduice farms that required depleting ground water to the point of collapsing the San Joaquin… Read more »

My sympathies go out to Josh Hart and the others in the Planning Commission with the unenviable job of writing this policy. I know that it is at least the second time around for attempting to craft a reasonable solar energy development map – which the county needs.