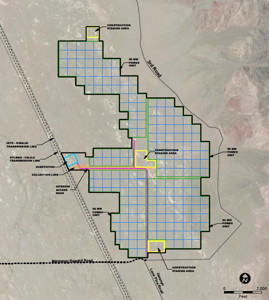 When Department of Water and Power official, Michael Webster, visited the Inyo Supervisors this month, he revealed that DWP has several solar and renewable energy projects either breaking ground or about to. So, how much of the renewable energy picture is the controversial Solar Ranch south of Independence?

After the meeting, Webster did provide Sierra Wave Media with more details about where DWP will get its power. He said 1.9% of the remaining 13% of renewable energy needed will come from Copper Mountain which is a 210 megawatt solar project in Eldorado Valley. Another solar project, Moapa Southern Paiute Solar, 30 miles northwest of Las Vegas, will provide 2.44%. It is a 250 megawatt project. The Southern Owens Valley Solar Project is 200 megawatts and will contribute 1.9% of the 13% still required.

The three projects equal 6 3/4% of the requirement. Webster said the rest of the renewable energy demand will come from projects from “other parts of DWP’s transmission system and locally in LA.”

Owens Valley people continue to strongly oppose the Solar Ranch project which is 1.9% of the State’s mandated 33% renewable energy from DWP. Organized locals along with the Manzanar Committee have kept a sharp eye on DWP’s environmental review of the Solar Ranch project and have vowed to continue their opposition.  DWP says continued comments or questions can be sent to:

ken, i live in LP and like you i was skeptical that the solar ranch could even be seen from 395 and manzanar. I ride my quad thru that area when I go prospecting for crystals and minerals, strictly amatuer not sure what i’m doing, but learning. the last couple… Read more »

salblaster: It’s good that you went out to look. Much of this discussion is about imaginary demons. The opponents say that the Solar Ranch will destroy the viewshed from Manzanar and will destroy tourism. I think that’s magnifying what will really be. In the Summer, the heat shimmer off the… Read more »

I like the term “Imaginary Demons” people who oppose this plan should come up with better reasons to hate it, solar is the way to the future. Seems to me that every time DWP gets mentioned in the Sierra Wave News they are always the bad guys,no matter what, I… Read more »

This story on DWP’s solar project presents facts DWP provided and the fact that there is local opposition. Your tired diatribe about what would have been without DWP is irrelevant. DWP foments most of the lawsuits. The last DWP General Manager said it’s cheaper to hire lawyers than to pay… Read more »

Benett: “This story on DWP’s solar project presents facts DWP provided …” And not a word in your post about the benefits of the solar project itself. Its all, “I hate LADWP.”. I can see where that hate comes from. But the Solar Ranch is not stealing resources for LA… Read more »

And do you really want to talk about destruction of viewshed?

Benett: Got it. Thank you. Very interesting. The “Fact Sheet” claims 440 Mega Watts. Recently in one of your stories, LADWP quoted 200 Mega Watts. Also, LADWP implies that 350 jobs would be provided both temporary and long term. Like most things, promoters hyper-inflate the good things and it’s not… Read more »

ALL DWP files about the solar ranch are here. Find SOUTHERN OWENS VALLEY SOLAR RANCH and then click the plus sign to reveal the documents.

Benett: Could I get a larger image of the Solar Ranch site map? The one you published is so small I can’t make out any details.

I thought I sent you one via email. I’ll do it now.
BK