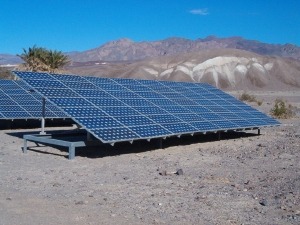 Solar Energy has been a hot topic in Inyo County recently, with several large-scale, commercial solar “power plants” being planned or proposed. For example, the Los Angeles Department of Water and Power has proposed a solar facility in Inyo County that would be located on 3,100 acres of its land, north of the Owens Dry Lake. Also, Inyo County recently revised is General Plan to include a section addressing commercial solar power or photovoltaic installations.

One question seems to always crop up around the discussion of building large-scale solar projects: Why do big solar projects have to be so big and take up so much land?

Jim Stroh, Ph.D., an Independence resident and retired professor from The Evergreen State College in Washington State, will discuss the practical and realistic reasons why it can take several thousand acres of land to accommodate a commercial solar operation.

The presentation is free and open to the public, and will be held on Saturday, June 25, at 7 p.m. at the Owens Valley School Multi-Purpose Room, 202 S. Clay Street, Independence, CA. For more information, contact the Eastern California Museum, 760-878-0258.

Dr. Stroh is an advocate for the practical use of solar power, has been researching the region’s solar potential for many years, and has informally advised local governments and utilities about the various aspects of commercial-scale solar energy facilities in the region.

In a previous presentation, his data showed that large portions of Inyo County rank among the nation’s most usable locations for solar-power installations.

His latest calculations are intended to shed some light on why large-scale solar installations usually are spread over thousands of acres of land, even though the actual amount of land containing solar or photovoltaic panels is far less than the size of the solar site.

Take the proposed LADWP “solar ranch,” for example. Plans call for using 3,100 acres of land, but only covering about 1,600 acres with solar panels that would generate about 200 megawatts of power. Other solar installations, such as those near Kramer Junction and the Inyo County Nevada State line, take up even more land, but still don’t use all the site for solar panels.

Dr. Stroh points out several quite logical reasons why “big solar” has to be so big.

To get significant amounts of electricity a utility has to install thousands of solar panels. One reason is obvious: solar panels don’t generate any power at night, so their “ideal” production is cut in half almost immediately. Despite technological advances, solar panels still convert only a small amount of the sun’s energy into usable energy. Finally, the panels can “self-shade” each other if they are placed too close together.

With so much solar power potential, and both the state of California and the City of Los Angeles setting ambitious goals for the production of renewable energy, such as solar, Inyo County will likely be grappling with the question of “big solar” for the foreseeable future.

Solar PV panels are incredibly inefficient. Displacing open land at any cost behind the facade of “green” energy is deplorable. There is a much better alternative. The Lower Owens River is inundated with overgrowth (at least according to recreational advocates). This unwanted plant material could be used in a biomass… Read more »