By News Staff on October 29, 2011 in Government Agencies/Utilities 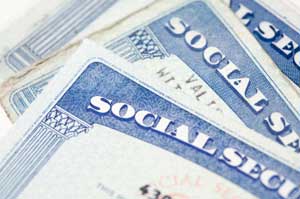 In Inyo County, 7.8 Percent of All Income Comes From Social Security

By Bill Bishop and Roberto Gallardo

If Inyo County residents didn’t receive their monthly payments from the Social Security Administration, 7.8 percent of total personal income in the county would be lost, a total of $51,844,531 in 2009.

In Inyo County, 4,125 people receive some form of Social Security payment, either an old age pension, a survivor benefit or a disability check, according to the Social Security Administration and the Bureau of Economic Analysis. Social Security beneficiaries represent 23.9 percent of the total county population.

“In many rural places, Social Security is a very critical element of the local economic base,” said Peter Nelson, a geographer at Middlebury College in Vermont. “It’s less important to a place like Los Angeles because there is so much additional economic activity going on there.”

Social Security payments are particularly important to rural counties and small cities because the money is largely spent in the community. “The seniors who get these payments are primarily going to spend their money locally,” said Mark Partridge, a rural economist at Ohio State University. “And they are a key reason why some communities are still viable.  If this money dried up, there wouldn’t be a lot of these small towns.”

Judith Stallmann, an economist at the University of Missouri, explained that Social Security payments help generate the sales that keep a rural business afloat.

Social Security payments go to those over the age of 62 who have filed for benefits, to survivors of insured workers and to those with disabilities. The program is mainly funded by payroll taxes. In Inyo County, 76.4 percent of recipients were retirees in 2009, 10.5 percent were survivors and 13.1 percent were disabled.

Changes to Social Security are being discussed in Congress, which is looking for ways to balance the larger federal budget. If benefits are cut — or if the eligibility age is increased — rural counties and small cities would be disproportionately affected, according to Peter Nelson.

“Cuts would have a bigger negative impact on rural places, absolutely,” Middlebury’s Professor Nelson said. “They are more dependent on Social Security.”

Source: Bureau for Economic Analysis and the Social Security Administration.

Bill Bishop is co-editor of The Daily Yonder (http://www.dailyyonder.com/), an online publication covering rural America, published by the Center for Rural Strategies (http://www.ruralstrategies.org/). He has owned a weekly newspaper in rural Texas and he has worked for newspapers in Texas and Kentucky. Dr. Roberto Gallardo is a research associate with the Southern Rural Development Center at Mississippi State University (http://srdc.msstate.edu/). This study was made possible with a grant from the National Academy of Social Insurance.

Data included in this story comes from the federal Bureau for Economic Analysis and the Social Security Administration. The figures in this story are from 2009, unless otherwise noted. You can see and download charts for publication, a national map and data for every county in your state and the nation from the Southern Rural Development Center at Mississippi State University: http://srdc.msstate.edu/socialsecurity/.

I would like to here the Public pension payout numbers for mono and inyo counties..

Sure it is a Lot Higher than the social security Numbers.

Or are most public pensioners moving out of the state/county due to higher tax rates.